CORVIN-IOAN MATEI: Opening to a world of elite 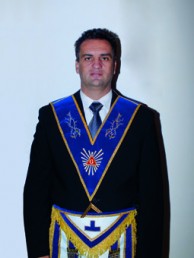 I first came into contact with the Masonic Forum Magazine some eleven years ago, before meeting its author, Brother Claudiu Ionescu. For me, a layman at that time, the magazine represented an open door into a world of the elites, into a world laden with history, but especially strongly anchored in the present, at the same time tracing the coordinates of the Masonic world in which i was going to walk soon enough.

Soon after I met Brother Claudiu I was impressed by his jovial bearing and his energy. Nevertheless, he became very serious and rigorous when it came to the magazine. At that time, he was completely at one with the Forum, he was the one-man orchestra, doing everything or almost everything by himself at a level which led you to think of the existence of an entire army of men behind the magazine.

In the years that have passed since my first contact with the Forum to the present day, although it remained faithful to its initial idea, that of being trailblazer, the Forum has evolved, it has polished itself alike to a profane man penetrating the Masonic world, climbing step by step the degrees of our Order.

Today, Masonic Forum has a large international opening. Its Honorary Committee includes names that are already celebrated among universal Masonry, such as Eugen Ovidiu Chirovici, Thomas W. Jackson, Chaim Henry Gehl, Alberto Menasche, Gustavo Raffi, Klaus Horneffer, Trevor Stewart, Richard Burgess, John Boettjer and Radu Balanescu, transforming from a magazine with an area of distribution limited to our country to a magazine whose circulation spreads across a large part of the Universal Chain and in whose pages we find ideas, impressions, experiences, feelings of some Brothers whom we would otherwise perhaps never have the possibility of meeting.

The Great Architect wanted me to receive the Light of the Master degree under the sword of Brother Claudiu, the WM of our Lodge at that time, in a masonic meeting whose emotional load I will remember with pleasure for my entire life.

And the Great Architect also wanted me to become Worshipful Master in my own turn in the same Lodge.

In the years that followed, participating in various Brotherly meetings as a WM or as a PM, I have observed with pleasure that the Masonic Forum was at once known and renowned everywhere, creating veritable connecting bridges between me and Brethren whom I was getting to know for the first time.

This is what Masonic Forum has become in present days: a road opener for Romanian Masonry, but also a place with a large international opening in which the Brethren from various parts of the globe can find each other and themselves.

But I think that  the most impressive thing characteristic of the Magazine is the fact that in a world marked by a global crisis, a world full of troubles, changes and even failures which seem too frequent lately, we can simply assert: Masonic Forum – the success story continues.