Past Master, Zamolxis Lodge No.182, Deva 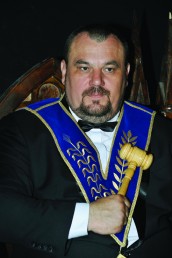 I brought the idea of this article from a Brother (RT) from Bucharest, a Brother dear to my soul, who asked me to assign a few rules to follow, a some questions to be adressed to the laymen, can­didates, who solicit the admit­tance within Freemansonry. What should have in view the Comittees of Investigation, the Investigators named by the Worshipful  Master, to what they are obligated to be careful, what features of the Candidates to have in view, to emphasize a report to finally be a real support to these who receive an entremely important mission from their WM.

I  quote from Wilkinson’s manuscript from 1727:

“– How did you become a Freemason?

– From my own will and at a friend’s recom­mendation.“

This sympathetic friend often proves himself to be that who recommended the layman, the one who fulfilled the  role of a godfather. Perau specified at 1745: „The Brother who talked in assemblancy about the candidate is called proposer, and in the decided day for this person’s admittance, he has the quality of a godfather“.

In most of the nowadays cases, the path of a layman from the state of a candidate to Freemason is warranted by a friend, a Brother who usually becomes the Masonic godfather of that one. The godfather or the godfathers (there will commonly be two of them) can protect the layman’s attendance and serve as presenting Brethren. These can guide the first steps of the newly initiaded in masonic life and will watch over his own instruction and improving, although here we should from my point of view talk about an important obligation. Unfortunately, in many Lodges the godfathering is meant as a simple formality when in fact the spiritual guidance of the godson by the godfather has a capital importance on the sinuous way that began in the reflection room and continued on the labyrinth’s corridors; a road materialized, substan­tialized within Temple’s interior, through the receiving of the Light. In fact, beside the Warden of the Column upon which is the mason in different degrees, the Masonic Godfather remains the privileged interlocutor, the Brother who is close to him, the Brother who has patience, who explains, who supports, who shows and guide him always. At Freemasonry’s beginnings, the god­fa­ther’s role was so important that he was considered responsible also for the godson’s following behav­iour, until that was raised up in his turn: to the High Dignity of Master Mason.

The admittance in Temple is asked willingly by a free layman and of good manners, a profane who since now knows the general principles of Freema­sonry and thus who act in a full acknowledgement, he must write his request down in person and address if to the WM, and from that moment the layman leaves on the long road of transformation, becoming a Postulant. Here he realizes he is asked certain questions about his own life: age, profes­sion, professional route, the reasons for he solicits the admittance in the Order etc. This period of searching and accumulations, of investigations and verifications is extremely important and lasts from a few months to a few years. Flavius wrote in De Bello Judeorum, with reference to initiation in the Order of Esseniens, that “these who wish to enter the Essenien Brotherhood do not obtain the allowance immediately. The Candidate waits outside the Order for 1 year“. Each candidature will be brought to the acknowledgement of the Orient and of the Obedience, in order to find out whether the postulant is present in the catalogue of the refused ones. In principle, in between the acceptance of the candidature and the received answer, on one hand, and the proper ceremony of initiation, on other hand, there must pass a certain interval of time. We can easily understand these different traditions, principles or rules. All of these are inspired by an imperious need of prudence. The layman, committing in the Masonic life, must in no way miss the gate, and the Brethren must analyze justly the decision they have to make allowing a candidate in their Lodge. Because to them the decision belong. In another order of ideas, there will be noticed that if a Lodge will be entirely sovereign when they take the decision to admit or not the candidature of a candidate or of an another, the Order is informed over any act of candidature and, in a certain measure, variable according to Obedience, they have the right to authorize or, at least, to validate an initiation which has to carry on in the absolute respect of the general rules of the Order. The admittance to trials is voted through ballot by the Craft’s members (white balls and black balls).

In Freemasonry before making a decision over the admission of a layman at trials, the Lodge gathers information about the one. These are the “investigations“ which appear to have not been known in the 18-th Century, when a Brother “presented“ the new member and the Craft voted immediately. The present-day system was outlined in the Statutes from 1823, articles 343 and following, according to which the layman had to be introduced by one or more members of the Craft, the WM then forwarding this one’s candidature either to a “perma­nent committee“, in the case such a committee existed, or  to “ a few special commissaries (three), whom he names in order to gather information about the morals and the qualities of the candidate and to make up a report for the next meeting.

The present-day rules – globally regarded – did not change at all since then, but they gained clarity. Nowadays, the WM “has to appoint three members of the Lodge, who will not know of each other, in order to investigate on the layman, each commissary to be to write down his own report and lay it down within a month“. The reports  are to be read in the Lodge. In the care of declining the first candidature, a new investigation is to be ordered, unless the Masters and the Fellowcrafts decide differently with a majority of two thirds from the present members. A third investigation may be ordered by the WM, the Lodge following to vote on this thing through signed bulletins about only the WM is informed to himself.

Regarding NGLR today, as a consequence of presenting the Aspirant’s Request of Initiation toward Lodge Secretary and of presenting this in Lodge, following the vote by the Brethren, the WM names the Brethren Investigators, further continuing all the stages, as established.

The inquiries have the main purpose to make the Brethren sure of the layman’s sincere motivation and qualities, starting from the well known premise that not always a “profane value“ can become a “Masonic value“. These investigations are not meant to verify the Masonic knowledge of the layman, lessened to general principles, but to judge the candidate’s qualities, vocation, spiritual orienta­tions and the degree in which these correspond to the Masonic ideal. The investigators must have in their view the layman’s character and try to clearly and unequivocally ascertain whether the postulant is a free man and of good manner, whether he fulfils the core condition to be accepted in order: the belief in Divinity and in soul’s immortality, divinity generically denominated as Great Architect of the Universe. Through free man, the Freemasons understanding that this dispose by his person by his own will, that he has no constraints to impede his future evolution, and that his mind is not indoctrinated with totalitarian ideologies; and the expression good manners remains, in my opinion, at the meaning given by Anderson’s Constitutions which recommended that in lodges to be admitted only loyal man, with probity and honor. The investi­gation has thus a huge importance and rarely does it happen a Craft to pronounce against the admittance, if three reports are unanimously favorable, and hence the importance the Worshipful must accord to choosing the investigators.

Although the regulations do not bring a definition over this issue, in this respect tradition succeeded in assessing the investigators to not repeat themselves asking the layman the same questions so they targeted three different researches:

In this way, the Brothers are faultlessly informed about the candidate, getting on to appreciate the personal value of the postulant as a good man, apt to become better, following the light’s path. In this way, the Brethren manage to distinguish how serious and profound are the reasons for which this asks to be admitted in Freemasonry. Although there does not exist (and probably will not exist) a set of standard questions, a “pack“ of verification and investigation on these who solicit the receiving of the Light, with your permission I would point at final a few questions (only a few from those that can be and will be addressed to these) to which I personally adhere, when it all is about investigating the Postulants:

Passing the Investigations, having the unanimous vote of the Brethren, he gets through the way toward knowledge, toward light, becoming from Postulant Recipiendaire, in order to be able to become Neophyte  evidently having as a final task the Initiation and his becoming as Freemason.

In a world dominated by desecration, in a world in which we increasingly harder find “values“, the present paper, far from being exhaustive, wishes to be a support to all those who will to bend over the before mentioned aspects.

May Great Architect of the Universe light thenceforth the Romanian Masonry and help us gain the Force and Wisdom necessary to work and permanent labor within the Lodges we belong.