CĂTĂLIN RAREȘ TURLIUC: An excursion in Greek-Egyptian Hermetism (continued from the previous issue) 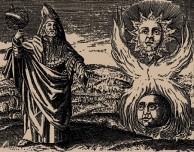 The influences of hermetism open a vast theme, yet most studies focus on the contribution of hermetism to the development of Western esoterism. A possible starting point are chapters I, II, VI from [3], and a popular book that analyzes Giordano Bruno from a Hermetic perspective is [15]. Furthermore, the interested reader will appreciate the contemporary literature of Greek-Egyptian her­metism: “The Chaldean oracles”, and the works of Apuleius of Madaura, among which the most famous is “The Golden Ass (or Metamorphoses)”. The influence of hermetism on esoteric and occult thought continued through the modern and contemporary era. Two well-known examples are the philosophic society “The Hermetic Order of the Golden Dawn” and the quasi-anonymous work “The Kybalion” [8]. In this article, we will focus only on two aspects: the “tradi­tional” (i.e. symbolic) connection with Freemasonry and the similarities with the Zoroastrian concept of Xvarnah (The Light of Glory), and with the medieval narratives on the Holy Grail, based on the premise that the Hermetic ideas have been conserved in the Arabic world, and subsequently they were discovered by the Western man.

In A. G. Mackey’s encyclopedia [9], the entry on Hermes mentions that: “In all the old manuscript records which contain the Legend of the Craft, mention is made of Hermes as one of the founders of Masonry. Thus, in the «Grand Lodge, No. 1, MS.», whose date is 1583 – and the statement is substantially and almost verbally the same in all the others – that «The great Hermarines that was Cubys sonne, the which Cubye was Semmes sonne, that was Noes sonne. This same Hermarines was afterwards called Hermes the father of Wysdome; he found one of the two pillars of stone, and found the science written therein, and he taught it to other men”[2]. Additionally, the first Hermes, the divine one, is distinguished from the second Hermes, the Trismegist, and A. G. Mackey states that the work of Hermes has influenced the hermetic rites and degrees, however without mention­ing what these rites and degrees are. Some authors describe some degrees of the Memphis- Misraim rite as hermetic, but we are not able to properly justify this attribute. A. G. Mackey refers to the “hermetic art” as a predecessor/synonym for alchemy. Finally, the author suggests that operative masons could have found out about Hermes from the “Polycronycon” by Ranulf Higden, but since we have no historical expertise on this subject, we will classify this idea as a speculative one.

The fact that the Old Charges mention a character which seems to be Hermes the Trismegist does not, in our opinion, validate any opinion on the “origin” or even “continuity” of freemasonry in the Greek-Egyptian hermetism: A. G. Mackey talks about the “legend of the Craft”. The correspondences between hermetism and freemasonry are considered from a symbolic-ideational perspective. Keeping this in mind, Hermes is mentioned in the Fellowcraft degree (in AASR), a degree dedicated to the study of the “mstrs. of ntr. and scncs.”, next to Mss., Ptgrs., Plt. and Prclss.

4.2 Zoroastrism, Islam and the Holy Grail

The premise of H. Corbin is that Hermes is to Sohrawardî the father of Wise Men and of the whole Wisdom. The author also mentions the similarities between the spiritual destinies of the mystic, whether he is called Zoroaster, Kay Khosraw or Hermes: descent into this world, forgetfulness (of his true origin), reception of a calling, the return, regeneration and apotheosis. H. Corbin proceeds to develop his argu­ment based on the article “The Krater and the Grail” [7], which describes the three stages of transmission of the hermetic works, from the source to the German author of the Holy Grail novel. These are:

Returning to H. Corbin’s work, the author describes the image of this “Urparzival”, an image which will blend with the concept of the hermetic Crater. The relevant cited fragment from Corpus Hermeticum is from the 4th part, entitled in Mead’s translation “The Cup or Monad”:

„Reason (Logos) indeed, O Tat, among all men hath He distributed, but Mind not yet; not that He grudgeth any, for grudging cometh not from Him, but hath its place below, within the souls of men who have no Mind.

Tat. Why then did God, O father, not on all bestow a share of Mind?

Her. He willed, my son, to have it set up in the midst for souls, just as it were a prize.

Tat. And where hath He had it set up?

Her. He tilled a mighty Cup with it, and sent it down, joining a Herald [to it], to whom He gave command to make this proclamation to the hearts of men:

Baptize thyself with this Cup’s baptism, what heart can do so, thou that hast faith thou canst ascend to Him that hath sent down the Cup, thou that dost know for what thou didst come into being!

As many then as understood the Herald’s tidings and doused themselves in Mind, became partakers in the Gnosis; and when they had «received the Mind» they were made «perfect men»”[3].

At a linguistic level, it is suggested that the Greek term is translated in Latin as “crater” and “cratera”, and subsequently, as “gradale” and “graal”. H. Corbin reminds of the motif of the two cups, one of knowledge, and one of forgetfulness, encountered in the work of Macrobius and in the Gnostic opus “Pistis Sophia”. Another possible correspondence is the Crater constellation, the function of the Grail becoming that of a “vas mysticum”.

Another important symbol analyzed by the author appears at the end of “The Cup or Monad”: the “magnetic stone” („magnętis lithos”): “And now, O Tat, God’s Image hath been sketched for thee, as far as it can be; and if thou wilt attentively dwell on it and observe it with thy heart’s eyes, believe me, son, thou’lt find the Path that leads above; nay, that Image shall become thy Guide itself, because the Sight [Divine] hath this peculiar [charm], it holdeth fast and draweth unto it those who succeed in opening their eyes, just as, they say, the magnet [draweth] iron”[4]. Regarding the symbolism of the stone, the French historian recalls the stone in the orient of the Ka’ba temple, as well as the tradition of the sixth Imam, Ja’far Sâdiq (in the Shi’ite denomination), according to which the companion angel of Adam is not recognized by man immediately after the fall due to its mineral form. Once man opens his eyes, it becomes the cornerstone of the Spiritual Temple.

Finally, the American article cited by H. Corbin compares the idea of the soul being attracted to the Monad or Grail, with the Phoenix being drawn to the magnetic stone, and thus the purification and regeneration of the soul is symbolized by the death and rebirth through the fire of the Phoenix. The symbolism of the Phoenix is vast, recurrent in numerous mythologies and folkloric traditions, and the exoteric sense is always double by an esoteric one (e.g. in Michale Maier’s work, the Phoenix is used in alchemical metaphor).

The presentation of Greek-Egyptian hermetism in this article has an introductory and synthetic role. We intentionally emphasized aspects related to the mythical figure of Hermes Trismegistus and the works attributed to him, and from the many literary sources we have chosen to focus on Corpus Hermeticum.

Regarding the influences of hermetism, we abandoned the idea of a general characterization, selecting only two particular and independent themes: freemasonry and zoroastrism/the legend of the Holy Grail. As future work, we set out to analyze more profoundly the indirect connections between hermetic ideas and the “morals and dogma” of freemasonry, using as a mediator the Western esoteric imagery, from Medieval times up to the modern era.

Another theme of research we would like to elaborate is that of the role of hermetism in its thriving period, as well as the relation with the other philosophical and religious currents in the first centuries A.D.

We conclude by reminding that the hermetic opus, in general, and Corpus Hermeticum, in particular, represent a testimony of the philosophic and esoteric knowledge in Egypt, a privileged area which radiated vast beams of science and art during ancient times. Hermes Trismegistus is the legendary hero endowed with the plethora of human virtue, who, condemning vice and ignorance, guides men of all epochs towards their betterment, in the spirit of the God denoted by his first name.

[2]  For an example closer to the historic source, cf. [13], Appendix A, “Transcript of a «Constitutional Roll» or the Ancient Charges and History of Masonry”.

[7] Henry R. Kahane and Renée Kahane. The Krater and the Grail: Hermetic sources of the Parzival. Illinois Studies in Language and Literature, (56), 1965.

[13] Henry Sadler. Masonic Facts and Fictions. Comprising a New Theory of the Origin of the ‘Antient’ Grand Lodge. The Aquarian Press, 1985. The original was published in 1887.