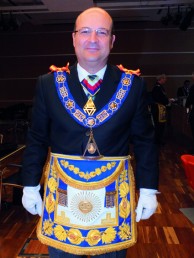 Most Worshipful Grand Master, do you think that people need Freemasonry nowadays the way they needed it in the past? What is the position of modern man towards Freemasonry?

I think that Freemasonry is today as necessary as it was centuries ago. Freemasonry is the oldest secular institution in the world and it has existed for years and years. Its principles are today the same as they were in the Middle Ages, but these principles and ideas are still needed by mankind nowadays. Although Freemasonry is very old, the human being needs today to preserve de meaning of liberty, equality and fraternity. Of course people need Freemasonry as in the past! If they did not, what would happen with truth, honor and virtue?

Obviously, Freemasonry is not the only one guardian of all these principles, but historically it is the one institution that has defended them continuously, and thanks to those Brethren who fought in the past to preserve them, today we can live in a modern society, at least in Europe, which has adopted the high ideas of our Institution. I think nobody can debate this fact.

However, modern man finds today that Freemasonry is something old fashioned that belongs to the past and that today is not very useful. It is a pity, but I suspect this is the common feeling amongst many non-masons. The democratic and social challenges have been resolved many years ago, now there is a democratic system; the question many ask is: why then should we need Freemasonry now? This is what the leaders of our Order should change.

Freemasonry is not a remembrance of the past, it is a living body that practices high and respectful principles and makes good men better persons. And this aim should never be forgotten.

Do you think that there are differences between Western and Eastern Freemasonry?

Yes, there are some differences between the Western and Eastern Freemasonries in Europe. Although Freemasonry is universal and exists everywhere around the world and its principles are all the same, each country has its own specific characteristics which influence, without doubt, the day by day practicing of Freemasonry in that country.

The mentality of the people, the proper history of the country itself, the geopolitical circumstances where Freemasonry grows and gets developed leave a kind of imprint on the particular Free­masonry of that country. The Eastern freemasonry being practiced today has developed after the fall of the Communist regimes, and certainly this historical fact should have an influence on it. The really amazing thing is that despite the dictatorship exercised by the Communist regimes, Freemasonry has bloomed fantastically in all Eastern Europe. And let me say that one of the best examples of this blooming is the NGL of Romania. At this moment, the Romanian Freemasonry is leading the Masonic development of Eastern Europe, and everybody should be proud of this leadership.

What is the most difficult problem facing Free­masonry today?

In my opinion, the main problem that we masons have today is to find a proper way to be connected with the society in which we live. Freemasonry needs to be known and well accepted by the rest of the society and sometimes there exist a terrible image of what Masons are and do. We need to fight against this misinformation and ignorance that provokes a kind of fear amongst non-masons. If we can explain who we really are and we can get a normalized relationship with the society, we would have got our goals.

How can Masonry help the society? 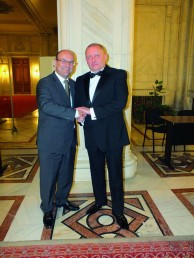 Obviously we cannot influence the society in a direct manner. We, Masons, are not a lobby and we do not have or express a political opinion, and much less do we talk about religion. We only deal with men, and this is our aim: we work in order to offer our members the ethical tools to become better persons.

However, Freemasonry should not live isolated from the problems of the society. Without taking a direct or active part, Freemasons, with our good example, should be able to show our fellow citizens that the Masonic principles are good and useful for themselves. Masons have the duty of respecting always the law of the country where they live and, at the same time, they need to act as good Masons not only at the time they attend the meetings at the Masonic Temple, but 24 hours a day, 7 days a week, 365 days a year; that is, all the time. How can we be a good example to the society if a Mason acts in a bad way? It would be shameful for everybody if this happens. Masonry means to wear a mental jewel on your heart that shows honesty and goodness to the others, do not forget it.

What is the relationship of Spanish Freemasonry with the government institutions, with the Royalty?

Unfortunately, the answer to this question is: none. Nowadays, the Grand Lodge of Spain has no relationship with the Spanish government and even less with the Royal Family. It is a real pity and very disappointing, but this the reality. Since I became Grand Master three years ago, I have tried to establish normal relationships and links with all the political, social and religious institutions in Spain.

Regarding the religious ones, the results are very, very good: we have met several times with high representatives of the Catholic Church, with Anglican and Jewish representatives and the outcome are really positive. But despite my great efforts, I must confess that nothing has been achieved regarding political institutions. All my attempts have been unsuccessful for the time being. I hope to change all this in the future. Please, ask me the same question a year from now and probably I will give you better information than now.

What is your opinion regarding Romanian Free­masonry?

As I said before, I consider that the NGLR is nowadays the leader of Eastern Freemasonry. It has grown up incredibly well in a very short period of time. Just an example: Spain has 50 million people and we are only 2500 Masons since 1982; on the other hand, Romania has 12000 masons since 1992, from among a population of 22 millions.

The NGLR is famous worldwide in the organiza­tion of Masonic events and this is one of the reasons why it was elected as the Grand Lodge that will organize and host the International World Conference in 2014. Obviously, I will attend, representing the Grand Lodge of Spain and I am certain it will be a fantastic success.

1974-1985 – bilingual education at the German College of Valencia, Spanish/German, obtaining the entry qualification for either the Spanish or German universities to study law.
1990 – Law Degree, University of Valencia, specialised in European Private Law
1995 January – opened his own office in Valencia, specialised in debt claims, merchant right and criminal law. In 2007 opened a new office in Javea (Alicante) with a team of junior solicitors.
Married, two children