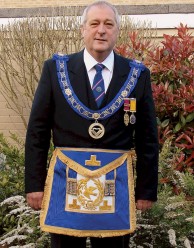 Thursday 20th October 2011 marked an historic day in the Masonic Province of East Kent, which is in the South Eastern part of England, just a short distance from the capital, London.  It was the day when Geoffrey Gordon Dearing, the new Right Worshipful Provincial Grand Master (Craft) and Most Excellent Grand Superintendent (Royal Arch) was Invested and Installed.

His Investiture as Grand Superintendent took place in the morning, followed by a lunchtime banquet, after which he was Installed and Invested in the afternoon as Provincial Grand Master.

The two ceremonies took place at the Winter Gardens theatre and functions building in the town of Margate, on the north Kent coast, which is the only building in the area large enough to accommodate such a great gathering.  A Masonic Temple had been specially arranged within the main hall, using Lodge and Royal Arch Chapter furniture and a large chequered carpet, all borrowed for the occasion from various Masonic Temples around the area.

People began to arrive early for the first Investiture ceremony and by 11.00 hrs, members from many Royal Arch Chapters within the Province, along with their Masonic guests, were arranged in theatre style seating to encompass three sides of the specially arranged Temple. Those many hundreds of Companions waited with great expectations of the ceremonial treat that they knew was about to unfold before them.

The morning’s events began with a colourful procession of Officers of the Supreme Grand Chapter of England, following which a second procession entered consisting of highly esteemed active Officers of the Province.  The Companions were then again called to order as a further procession entered with great dignity and distinction, which comprised the distinguished guests, such as a number of Most Excellent Grand Superintendents from other Provinces, accompanied by an array of their Deputy Grand Superintendents and Second and Third Grand Principals.  Once the processions had taken their seats, the hall again fell into a quiet mood of eager anticipation until, at last, the procession of the Deputy Grand Superintendent in Charge, Excellent Companion Trevor Climpson, entered under the direction of the Provincial Grand Director of Ceremonies.  Excellent Companion Climpson then formally opened the Provincial Chapter meeting. 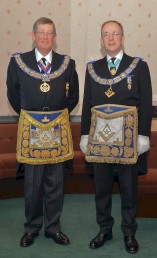 Next came a loud report at the door and the Grand Director of Ceremonies, Excellent Companion Oliver Lodge, entered alone and with great solemnity, to announce that the Presiding Officer, Most Excellent Companion Jonathan Spence, the Second Grand Principal, was outside and demanded admission.  A deputation of senior Officers was formed and the Presiding Officer was escorted into the hall, to the enthusiastic applause of the gathered assembly.  He then took the Chair of the Chapter and gave a short address to the Companions before there was a further report at the door and the presence of the incoming Grand Superintendent, Geoffrey Dearing, was announced.  Jonathan Spence then Invested and Installed Geoffrey Dearing with great ceremony, to the obvious appreciation and delight of everyone present.

The newly Invested Grand Superintendent then re-appointed the Deputy Grand Superintendent, Excellent Companion Trevor Climpson, along with the Second and Third Provincial Grand Principals, namely Excellent Companions Brian Barden and David Kershaw respectively.  Further key Officers were also appointed before Geoffrey Dearing gave a short address to the Companions during which he thanked Jonathan Spence for the wonderful manner in which he had Invested him.

The Convocation was then closed and the Companions retired for lunch.  Whilst everyone was enjoying their luncheon, a handful of hard-working Brethren dismantled the Royal Arch layout and replaced it with the pedestals and other furniture necessary to convert the hall into a Craft Lodge Room.

As the afternoon’s events drew closer, the hall once more filled up with members of Lodges from all around the Province of East Kent along with their Masonic guests.  More seats were needed to accommodate an increase in numbers over the morning meeting and there was a new buzz of excited and eager anticipation. 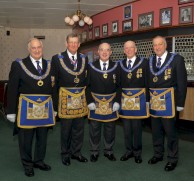 Very Worshipful Brother Roger Odd then opened the Provincial Grand Lodge formally, after which there was again a loud report at the door of the hall, which announced the solemn and dignified entrance once more of the Grand Director of Ceremonies, Very Worshipful Oliver Lodge, who informed everyone that the Presiding Officer was outside the door and demanded admission.  The Presiding Officer was the Deputy Grand Master of the United Grand Lodge of England, Right Worshipful Brother Jonathan Spence, who began his Masonic career in the Province of East Kent, which he considers to be his “Mother Province”.

It was a long but very happy day for our Province and everyone was delighted with the spectacle to which we had all been treated.  Our new Provincial Grand Master will give strong, friendly and caring leadership, which will undoubtedly bring him great respect and popularity in the time to come.  The Masonic Province of East Kent looks forward to many happy and Masonically rewarding years ahead.

Well my friends, I hope you have enjoyed my account of a spectacular day here in the south east of England.