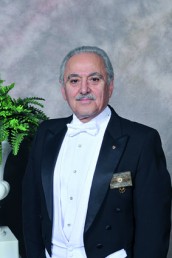 Do you think that mankind needs Freemasonry today as it did in the past?

Freemasonry today, just as in the past, offers the individual a system or program for living a balanced, satisfying existence by focusing on self-improvement and life-long character develop­ment based on high ideals and moral values. The Freemason demonstrates his commitment to these principles by practicing tolerance, charity, compassion, and respecting the opinion of others and attending to the needs
of the community and society.

Freemasonry continues to evolve in a steady but purposeful manner. The strong foundations laid by our founders and the principles they held dear are guiding this evolution and controlling the nature and the rate of change. This measured, incremental change will serve us well for the future and ensure that we remain true to the timeless principles of our noble society, while at the same time achieving relevance in the today’s world.

The Craft, by its very nature, is well-poised to take advantage of new interests and the intense feelings and new directions which are likely to be created. As Freemasonry’s boundaries expand, it will undoubtedly maintain an active presence in society as it keeps its emphasis on two priorities: promoting integrity in all persons and fostering the free flow of ideas for the benefit of civilization.

The universality of Freemasonry not only stands for the inclusion and coming together of all for the advancement of Masonic ideas and ideals, but also, and just as importantly, it emphasizes the effect that Masonry has or should have on the global scale. Imagine the good will that can be generated by Freemasons working together across oceans on building bridges of mutual understanding and establishing exchanges that contribute to better relations among the peoples of the world.

Society still needs a movement such as Freemasonry and there can be little doubt that this need will increase rather than decrease in the 21st century.

Are there differences between Western and Eastern Freemasonry?

Freemasonry in Europe continues to be mainly the province of the elites of the society, while in the United States it is very much based on the individual traits of a man rather that his family affluence, academic achievements, social standing, title or wealth. As such, in American Lodges you may see men from all walks of life and of differing level of education and worldly possession, join together to practice their Freemasonry and celebrate their fraternity. For example, the very patrician American president and Freemason, Theodore Roosevelt, was known to enjoy sitting in his Lodge with his gardener as equals.

Furthermore, Freemasonry and its affiliated entities tend to be more informal and more open and accessible, in the United Sates. Concordant bodies such as the Shriners, Order of the Eastern Star and the several youth organizations with their varied activities in the community give the fraternity a family image, while in Europe and elsewhere, in spite of the gradual appearance of similar organizations within the household of the fraternity, Freemasonry is still a private affair.

What is the most difficult problem facing Freemasonry today?

To me Freemasonry, as a concept, is immune to any conceivable afflictions. However, Freemasons, as members of this ancient fraternity, have been and are susceptible to encountering problems of varying degrees. Tyrannical regimes, hard line religious influences, and groups opposed to liberty and freedom of thought, have dealt serious, and at times, crippling blows to Masonic communities in different parts of the world.

Furthermore, we are often the victims of our own
actions. Personal ambitions and strong egos, challenges and rivalries, emanating both from within and without, from friends and foes alike, create major problems and tend to taint the reputation of the fraternity, providing opportunities for the imposters and descenters to set up irregular, so called Masonic entities claiming legitimacy, equal rights and privileges and creating chaos and confusion, as is currently evident within a number of Masonic jurisdictions, old and new.

Is your Grand Lodge, in particular, faced with a major problem?

Every Grand Lodge, from time to time, is faced with problems or as I would like to call them, challenging situations – some external and some internal – that need attention. In the United States, an ongoing situation has been the Anti-Masonry campaigns, instigated by the members of certain religious institutions, which have seldom amounted to major problems.

With the gradual opening of Freemasonry to the public, and with it, the spotlight on the myriad and praiseworthy activities Freemasonry represents, changes in public perceptions of the Craft and its influence on society has become more apparent. The outsiders’ perspective, by way of connecting Masonic history with what else was going on in the world at the time, has shed much light on both sides.

In the case of the Grand Lodge of Washington, D.C., a somewhat challenging situation, also shared by our sister Grand Lodges in the United States, was the steady decline of membership in our constituent lodges, since 1955. However, this downward trajectory has been reversed in recent years in the lodges of our nation’s capital. With the changing social trends and the expansion of information technology, we are optimistic about the continuation of positive growth in the years ahead.

What has been the relationship of American Freemasonry with U.S. government institutions, including the Presidency?

Freemasonry and Freemasons have played a significant role in the development of civil society and how a government relates to its people. Many of the great thinkers of the so-called Age of Enlightenment or Reason (Voltaire, Newton) were Freemasons who helped lead what became a major 18th century European and American cultural movement away from the established Old Word order of monarchies and toward an economic and political liberalism based on the values of individual freedom and private property.

The establishment of the United States following the American Revolution gave the American Enlightenment thinkers an opportunity to put their philosophy to the test. Those founding fathers included many Freemasons who, in searching for a model for that new government, were inspired by the example of the good and stable governance to be found in their Masonic lodges. For instance, instead of swearing allegiance to a king or prince (as was the standard in the Old World), one would now take an oath on a book of scripture and swear to uphold a constitution and the rule of law.

This new “Masonic culture” was quickly assimilated into the very fabric of American society, so that over time what was once a uniquely Masonic method of operation has become second nature in
our local, state, and national governmental insti­tu­tions. The Masonic threads running through that American fabric are readily apparent even today, although most Americans are probably unaware of the Masonic origins of our civil society. What started
as a great American experiment became a “shining city on a hill”, a beacon of light for nations and peoples all over the world searching for a better way.

Throughout the history of the United States, it is true that Freemasons have played a prominent role as leaders in executive, legislative, and judicial branches of government, as well as in the military establishment and other public and private enterprises. And in spite of the fact that nearly one third of the U.S presidents and good many of the senators, congressmen, governors, mayors, and so on have been Freemasons, there is not and never has been any official, direct relationship between the fraternity and our governmental institutions.

Because you have held high rank as a Freemason for many years, please tell us what are the most important qualities for successful leadership in the Craft?

Let me begin by reaffirming that the highest rank in Freemasonry is that of Master Mason. From then on, whatever rank you achieve or whatever title is bestowed upon you, is either recognition of the services you have rendered to the fraternity or an opportunity to continue to serve in yet another capacity. In this respect any and all rankings and titles should in fact be construed as further assignments for doing more and better work.

Accumulation of knowledge at every level, dedication to the tenets and principles of the institution, combined with leadership ability and readiness to respond to the call of the Craft, are the essential ingredients for the effective operation of Masonic organizations and serving the fraternity and the community.

In April, you had the opportunity to experience first hand the Romanian Craft in action and to spend a good amount of time with Romanian brethren. Given that Romania will host the World Conference of Masonic Grand Lodges in May 2014, please let us know your impressions regarding Romanian Freemasonry as well as our Grand Master, MW Radu Bălănescu.

The Grand Lodge of Washington D.C. prides itself in having played an active role in the restoration of Freemasonry in Romania. My recent trip to your beautiful country and experiencing the workings of the Craft in this sister jurisdiction at first hand, has strengthened my long-held belief that Romanian Freemasonry, under the banner of the National Grand Lodge, is well on its way to achieve its goals and gain its rightful place amongst the regular and respected Masonic institutions in the world.

The rousing success of the Grand Lodge session in April 2012 and the current ambitious projects underway within the Craft and the community in Romania, all attest to the effective leadership of your Grand Master, Most Worshipful Brother Radu Bălănescu, the dedication of his team of officers, as well as the overall quality of the Romanian Brethren. This provides further validation and justification of the decision of our sister Grand Lodges to entrust the National Grand Lodge of Romania with the task of hosting the XIII World Conference of Masonic Grand Lodges, in Bucharest in May of 2014. The Grand Lodge of Washington, D.C., having held the IX World Conference in the capital of our nation, stands ready to offer any assistance that our Romanian brethren may find useful as they prepare for this auspicious gathering.