BOGDAN MIHAI PRODEA: What does it mean to be a brother to your father? 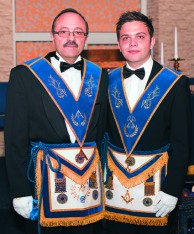 As we well know, the address formula “Worshipful Master, beloved brethren” is well known to all of us and we all use it in the beginning of our allocutions in the Temple. The tension and the emotion of the moment increase when among the Brethren present in the Lodge is counted your own biological father, who is watching you, making every moment in the Temple increase in intensity. Saying these things, my Brethren, I can begin to recount to you my Masonic life and experience and to confess to you what it means to me to be both “Son” and “Brother” at the same time.

My name is Bogdan Mihai Prodea, I am the master mason in the Pax Mundi Lodge, No. 119 in Brașov. I was born at the foot of the Tîmpa, in the year 1990, and I am at the moment away on studies in Great Britain. I hold a Bachelor’s Degree in “Business Management” from the University of Coventry and I am currently a master’s student at King’s College in London, specializing in “International Management”.

My first real contact with Freemasonry took place at the age of 19, when my father revealed to me his belonging to the Order. I remember that moment as if it had happened yesterday and the same emotion comes over me every time I remember his words: “Now that you are of an age to understand what this is about, I want to tell you that I am a part of Freemasonry.” You can imagine, my Brethren, that a long discussion followed that evening, on the theme of Freemasonry. An evening full of the son’s questions to his father and the father’s answers to his son, a discussion between the freemason and the profane. My father told me that evening the things that the profane could find out and which were sufficient to arouse my interest in the Order. It no longer mattered, what information I have about Freemasonry from other sources, because my perception was altered by the information which I received from a true source and from a man whom I trust fully, my father. There followed a period in which the desire to find out more led me to the books which were made available to me, books which made me understand that I wanted to be a part of the Masonic Order. After the discussions I had with my father, we decided to place our request to become a Freemason in the Pax Mundi Lodge, in Brașov.

The steps that came before Initiation had a special significance, because I wanted very much to pass all the test con brio, to be accepted, but at the same I was afraid not to make any mistake that might affect or disturb my father. The fact that I managed to pass these tests successfully and I was announced that I would be initiated was a great joy to me, but also a great relief.

In April 2010, six months had passed since the moment my father told me that he was a Mason, and I was preparing physically, but especially psychically and spiritually, to be received in Freemasonry. The day and the moments before the Initiation meant to me, as I am sure they did for all you, my Brethren, unique moments in my life. The mystery of the ceremony whose protagonist I was to be made me feel anxious, moved, but also a bit fearful. The presence of my father in the Temple, on the one hand, calmed me, because I had the certainty that someone close to me was near me, but, on the other hand, I was asking myself why he had not told me anything of what was going to happen, why he had kept it secret from me, who am his son. I was asking myself whether I would see him from the beginning or he would let me fend for myself, whether he would treat me as he did at home or completely differently. There were questions which sent the emotion of the moment to an extraordinary level, making me feel special. Now, looking back, I can say that those emotions, accumulating, induced the necessary state in me to be apt, spiritually and psychically, for my Initiation into Freemasonry.

After undergoing the well-known tests of Initiation, I was impatiently waiting for my hood to be lifted, to receive the much-desired Light and to see what was around me. Many thoughts and questions came to my mind while the Venerable Master’s three knocks of the mallet preceding the reception of the Light. I was asking what it was like around me, where my father was, whether I would manage to see him and how I would react. Those seconds seemed like hours, but at last the hood was raised and I could look around me. Chance had it that I looked exactly at my father, who was looking straight into my eyes, being extremely serious, but at the same time visibly moved, experiencing in his soul the tests of initiation together with me. My joy was completed by the fact that, looking around, I saw people I knew as well as new people, who were all rejoicing for me, making me feel like I had achieved something important. With the reception of the apron and the gloves, I understood that the road I was beginning on at that moment would not be an easy one, but an extremely interesting one. Initiation will perhaps remain the most important moment of my Masonic life. That evening offered me special emotions and experiences which have left deep impressions and which will endure eternally.

In the subsequent meetings, I tried to observe and to understand the ritual that was unfolding in front of me. As was normal, many things did not seem to make sense at that moment and the essence of the ritual was hard for me to understand. I was listening, thinking and preparing the questions that I would address to my father home, after the end of the meeting and the festive board. Most of the time, these questions generated very interesting discussions which not only clarified certain Masonic things for me, but at the same time strengthened the father-son relationship. These discussions fed my thirst for knowledge and pushed me to study, with regard to personal polishing and evolution in Freemasonry.

The next moment which I would like to dwell on was that of my rising to the degree of Master Mason. That sublime ceremony which crowned all my efforts in Masonry up to that point made me understand that receiving the degree of Master means first of all a great responsibility to my Brethren and to my father. My father was the Junior Warden at the moment of my rising to the degree of Master. His participation in the ritual, in those moments which the brethren know very well, made the ritual even more special and the emotions of the moment pushed to a superior level. The moment when my Brethren congratulated me meant a great lot to me, seeing that everyone was rejoicing in my achievement, something which is, unfortunately, “threatened with extinction” in the profane life of our days. My father congratulated me as well, visibly moved and joyous at the same time, but with the seriousness of an Officer of the Lodge, showing me that from now on, “I was all grown up” in Masonry as well and that I had to assume everything I would do subsequently.

I began this article referring to the address formula “Worshipful Master, Beloved Brethren”, a formula which each one among us, my Brethren, utters while looking first of all to the Worshipful Master, in the beginning of our allocutions. In my case, in the Chair of Solomon sits my father himself, in this Masonic year, and the moments when I addressed the Brethren in this period had a special meaning for me. In those moments, you realize that Worshipful Master must lead the Lodge and take care of the Brethren in equal measure, without having any “favorites”, even if the would-be favorite is his son. Due to this fact, my father and I have managed to know each other objectively as well, as persons, which is a very important thing in both family and Masonic life.

Not few were the moments when I asked myself what the actual connection between my father and I is. What are we now? Are we father and son, are we brothers or both? What is the primary relationship? After all the time that has passed since my initiation, I can say that these two relationship complete each other, harmonizing and perfecting relations between us. The openness of both of us to communication is perhaps the most important things facilitated by the fact that we are Brethren. Masonry has taught both of us to solve the dissensions between father and son as two good Freemason brothers, discussing and analyzing the respective problems in a cal and mature way.

From my own experience, I would dare to say that bringing the son by his father into Freemasonry can only be a benefic thing for the two, as well as for the Lodge and the Universal Masonic Chain. I say these things because the new initiate will develop spiritually and psychically following the Masonic principles, becoming a better man who will be able to have a positive influence both in the family and in profane life, and in the Lodge among his Brethren. On the other hand, the Masonic Order can last over the years, as it has done up until now, and can develop, by transmitting its principles, tradition and teachings from one generation to another, assuring the continuity of the Masonic Order.

Even if it may seem strange in the beginning, for father and for his son alike, being a brother to your father can intensify the beautiful Masonic experience for the two. The idea according to which a mason must raise his child in the spirit of and according to the Masonic principles must be embraced by the Brethren, because in that way the child will be able to develop freely and harmoniously. Thus, the child come to the age of maturity could step in his father’s footsteps, becoming a Freemason, carrying on the tradition of the family and the values of the Order.