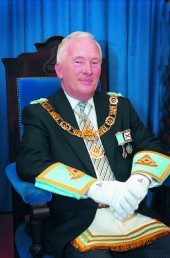 Most Worshipful Grand Master, please tell me, these days, people need Freemasonry exactly like they did in the past?

Yes, they do, yes. But because of the situation of the society; and the difficulty with work and new jobs and lack of money coming into the company – the firm – the home, I should say; they are backing off Freemasonry, a good percentage, because they do not have the funds to keep their membership check in order. And that’s understandable, because even in hard times, we lost many members in the past – way back in the – these times we can recognize in the past.

It’s going to be difficult to get back to where we were, but we can do it and it will be done, from my point of view. And if we “sell” Freemasonry for what it is, we will find, speaking to people, that they have a bias against Freemasonry. That has to be challenged. And that is what I do, I challenge that. And I have gone to interviews with different people and they made specific points and I said: sorry, sir, but you are absolutely wrong. Freemasonry is a signed system! And also, it does good for those who are Freemasons. And it helps them to help society. And so the thing is a link, a chain, whatever the case might be, and they do this very, very well. As well as that, a lot of articles are written. I have written some articles in the papers and I have been on radio and television and whatever.

I know that you recently granted an interview to BBC; I would like to narrate it to us…

Yes. There was a girl from BBC Ireland who decided she would interview me because she had learned that I was the Grand Master of Ireland. It was because her boyfriend, the lad was a freemason. And he happened to mention my name. They were in Belfast, but I was up in Londonderry. Nonetheless, she came up to Londonderry to do the interview.

So it all started with how did you become a Freemason? What’s in it for you? What’s in it for me? And all these sorts of things were questioned. And I said: look, first of all, if you want to be a freemason, you have to believe in the Supreme Being. It does not matter who your God is, whatever name you have to use, use it, but he has to be the Supreme Being who created the system, the universe.

And of course, that’s the background, so we need not talk about having sort of a Protestant faith or a Catholic faith or any other extremity of what might be called religion. And of course she was quite happy to accept it.

She says: But what do you do? So I said: well, in fact, we make good men better. She said: well, how do you do that? I said: we have three degrees in Freemasonry. The entered apprentice, the fellowcraft and the master mason. And when you become the master mason, that’s it, you are top of the tree, right? Beyond that, side degrees, they do not really matter to us very much, I have side degrees.

What sort of secrets do you have? – she asked me. I said: secrets? We have no secrets! Who ever told you that, you know? She said: well, I hear noises about you – about Freemasonry having secrets and not sharing them… I said: do you have a credit card? would you give me its number, yeah? And she said: not at all, I will not!, you know? Now that’s where I’m coming from, alright? I’m not going to give you my credit card number.

She started to talk about the Church and the religions and their attitude and how they viewed Freemasonry and the antagonism they have for Freemasonry. And I said: I’ll tell you what, I could name you an awful lot of clergymen who are Freemasons. And they are very committed Freemasons, I am glad to see. But what has happened is that the young cubs have come in from the universities and they are reading more history of religion and they are of course adopting ideas and notions of what freemasonry is all about and it’s not right. They are not saying the correct thing.

But Freemasonry has been around for a long, long time. But I go back to what you were saying earlier. The fact of the scarcity of funds and loss of jobs and the scarcity of jobs, or whatever, that is having an effect, as I said, because people are frightened to spend money on Freemasonry…

This problem is the greatest challenge facing Freemasonry today?

Oh, yeah, yeah. We have been through a number of challenges over the years. And it is because of the economy acting – whether it is strong or not strong; and when it is not strong, people suffer; and they say: you are not going to that, because it costs too much, or whatever… That is what happens, in fact. But Freemasonry is a good organization, because we frame peace, love and harmony. And the peace love you know, but the harmony seems to me that most vital one. Because if we do not have harmonious relations, we are going down the hill. We want to keep people of like minds. We do not always succeed.

When did you joined Freemasonry? Tell me about your Masonic life.

I was just in front of you! I like the fact that I can tell you that I go back all this way.

But anyway, everything went well and I eventually got down to the chair.

So I was delayed for a year, there was an elderly gentleman whom I won’t name, but he, in fact, was very watchful on these issues and he would have been staggered if I had got the job at that time. But of course, what happened was that they borrowed time.

And after that year had passed, then everything cooled down, and I then made for very good friends with the man I am talking about. I became the Deputy when the Assistant had moved on to become Provincial Grand Master, the current Provincial Grand Master having retired, cause he had done quite a number of years in that post. He was in his early nineties, it was time to change.

There is no limit to how long you stay in office, there is no end to the post, but it’s nice to get out.

I then did the Assistant, of course, I enjoyed that thoroughly and have enjoyed it ever since. And then I became the Grand Master of Ireland. Now I’m six and a half years Grand Master. And the Deputy-ship was about four years, more or less, so it’s been about ten and a half years since I moved into the Deputy-ship and then Grand Master’s job. and the Grand Master-ship I enjoyed thoroughly and I still enjoy it. And I have to get out in five to ten years… I bite my tongue – I do not have to get out – I’ve done the job well enough that they will keep me in the job even for a longer period.

But there is a time when fellness kicks in and old age starts to cause difficulties. I guess I’d better get out of here because I’m going to make mistakes. And that’s the way it works here. I haven’t gotten to make mistakes yet, but I’ve a great field with all these and all the Provincial Grand Masters. I know them and they all know me – well, except for those changed. There are new guys come on to the field. I thoroughly enjoy the brotherhood!