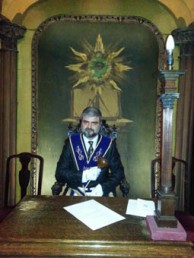 Rosslyn… a place that fascinates alike the profane, but especially the initiates.

For the profane, a superb cathe­dral, full of mysterious things and, after the popularization done by Dan Brown, the place where the Holy Grail is hidden.

For the initiates, Masonic history and symbolism, esotericism; it is futile to enumerate all the reasons. Many others. This has always been a subject about which I am passionate, and one of my oldest desires, at oncewith my initiation into Freema­sonry, was visiting it, which I transformed into a project on the occasion of my election as WM. To my surprise and joy, more than a quarter of the members of the lodge answered fa­vorably, the brethren making the proposal, as well, of searching for a lodge in Edinburgh that we would visit.

With the help of bro. Claudiu Ionescu we managed to establish a connection with the St. James Operative Lodge no. 97, and the happy event was that the day immediately following our arrival, this lodge worked in a sitting of the 3rd degree, and that the WM, Bro. J. Clason Jr., accepted our visit in such a large number (17 brethren from our lodge and three other from other lodges).

The trip to Edinburgh was scheduled for four days (Thursday – Friday – Saturday – Sunday), the central events being the visit to the chapel, on Friday morning and visiting the lodge, Friday night.

The arrival in Edinburgh made us all enthusiastic. It is certainly one of the most beautiful cities in Europe; in 1995, it was entered into the list of the UNESCO world cultural patrimony. If Scotland is the country of kilts and bagpipes par excellence, of haunted castles and highlanders, Edinburgh represents, undoubtedly, her heart. The symbol of the city is, first of all, the Castle, sitting on a basalt rock, whence it dominates its surroundings. Here, one can admire the Crown Jewels of Scotland and the room where Mary Stuart have birth to Jacob VI, king of Scotland. The oldest built structures in the city are the four massive pilasters of St. Giles Cathedral (the patron of the city), dating to the first half of the twelfth century. Among the representatives personalities of Scotland who were born or who lieved here, I recall to your memory Alexander Graham Bell, the pioneer of the telephone, Arthur Conan Doyle, the writer, the literary parent of Sherlock Holmes, David Hume, the philosopher and historian, James Clerk Maxwell, the Scottish physicist, Joanne Kathleen Rowling, the writer, authors of the Harry Potter series of novels, who wrote her first novel in a coffeehouse in Edinburgh, Sir Walter Scott and Robert Louis Stevenson, the novelists, but also the beloved actor Sean Connery and the former British Prime Minister, Tony Blair.

Throughout the duration of his stay, we wandered through the streets, admiring the architecture, visiting the castle and the picturesque places, but also stopping by the museum of whisky, situated nearby… We fell in love at first sight with both the city and its inhabitants…

Friday morning, we started to Rosslyn Chapel. The chapel, situated on a hill in the vicinity of Edinburgh, was built by William Sinclair, the prince of Orkney, in 1446, as part of a religious architectural ensemble with a Celtic touch. Unfinished, it remained almost aban­doned until 1736, when it was remade, and a century later, the architect David Bryce gave it the aspect we see today. Overwhelming, even for the unwitting visitor, it was compared to “a tapestry in stone” or with “a library in stone”. 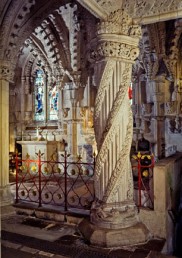 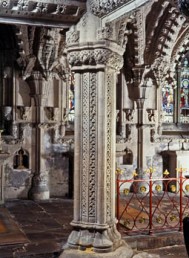 We had the opportunity to see the well-known “pillar of the apprentice”, which, according to the legend, was sculpted by an apprentice while his master had departed for Rome for inspiration. Upon his return, blinded by envy, he is to have killed the apprentice for his daring – a sort of local legend of the Manole master – a fact noted, moreover, by a sculpture within the chapel. Another, prosaic version of the legend, claims that the pillar was sculpted by a stone worker called Prentiss, whence the apprentice pillar gets its name. Undoubtedly, it is of superior beauty than the pillar of the master, which is more austere and which we could also admire inside.

“The golden age of Christian symbolism, in the Western Christian faith, is situated in the medieval age and was expressed most of the time in the numerous European Gothic churches and the cathedrals of that age. Unfortunately, few are capable in our days of inter­preting without rashness these signs whose meaning was easily understood by the majority of people in the Europe of the Middle Ages. The recent century has shown an accelerated secularization of the society, which has contributed to a large extent to the inaptitude to understand the true meaning of this symbolism. In a world more and more secular, materialistic and empirical, many people do not have the capacity to understand symbols, as opposed to the signs. Once fallen into desuetude, the meaning of the symbols was easily lost, with the exception of a small minority”, bitterly noted Robert Cooper, the curator of Museum of the Grand Lodge of Scotland, in his book “The Rosslyn Hoax”.

I have seen the multi­­tude of “green men”, above 100, a pagan sym­bol, probably, of fertility and rebirth, a leitmotif of the chapel, the sculp­tures repres­ent­ing the seven sins op­posed to the seven virtues. 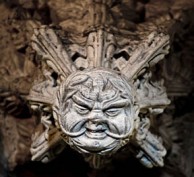 We descended into the crypt to see the grave of the builder of the chapel. Although on his grave he is marked “William St. Clair, knight templar”, some have doubted his belonging to that Order, but the eight-point cross engraved there is yet another argument in favor, it being known that the Templars wore on their armors both the simple and the eight-point cross.

Robert Lomas and Christopher Knight, the two authors of the bestseller The Secret of Hiram, claim that the western wall of the chapel in Rosslyn is in fact a copy of the Wailing Wall in Jerusalem. One of the inscriptions attracted our attention: Forte est vinum fortior est rex fortiores sunt mulieres super omnia vincit veritas (Wine is strong, the king is stronger, the women are stronger still, but the truth conquers all). This inscription connects Rosslyn to the Temple of Solomon, this being the answer to a riddle by Darius I of Persia: “Who or what is strongest?”. Zerubbabel answered correctly and, as a sign of recognition, Darius allowed him to rebuild the temple of Solomon (the second temple). Aside from that, the two pillars, of the apprentice and the master, have been resembled to the Boaz and Jachin columns outside the temple of Solomon, and the analogies do not stop there. Some voices say that the initial plans of the chapel are similar to those of the temple.

After a last exterior tour of the chapel, laden full of memories, we went back to Edinburgh.

Friday evening, still full of these impressions, we set out for the temple where the St. James Operative Lodge works. According to the previous understanding, we arrived an hour early, to take a tour of the place, together with the brother Secretary, Maurice J. Wilson. The temple is situated in the St. John Chapel (!), and it represents the oldest temple in which lodges have been holding their meetings without interruptions – from 1735. The chance (or the will of the Grand Architect) has made it that the messengers of the Brotherhood of St. John Lodge should take shelter in the St. John Chapel… The chapel still has its original eighteenth-century paintings, as well as the initial arrangement of the Scottish lodges: the SW sits in the N-W, and the JW in the S-W. in the four corners, paintings can be found, in the shape of statues of William Shakespeare, Robert Burns, Sir Walter Scott and Lord Byron. In the center of the northern wall, a painting can be found that is a representation of William St. Clair of Roslin, the first Grand Master of Scotland, who was also initiated in this temple. To his right, one finds paintings representing a man and a woman of the 18th century. The presence of a woman in a lodge is extremely unusual, but the two (Baillie and John Jack) are the protagonists of an uncommon love story and fidelity in those ages bereft of virtue, such that “in death, as in life, they are not to be divided”. This is where several personalities have been initiated or participated, such as the poet Robert Burns, Sir Arthur Conan Doyle and Rudyard Kipling.

The brethren proved to be extremely welcoming, and alongside ourselves they had as visitors delegates of some lodges from the United Kingdom. The meeting was not one of the third degree, as it was announced, but one of initiation. It was an experience we will certainly not forget too easily. The ambiance was created and maintained by the organ of the old chapel, and the ritual was not read – the officers, resembling true actors, recited it from memory. The very relaxed atmosphere was obvious when one of the officers forget the text and the brethren, slightly amused, reminded him. When the work was finished, alongside the anniversary pines (which we made for the fifth anniversary of our founding) and a plaque on behalf of our lodge, we offered our brethren several issues of the Masonic Forum as well, and they were pleasantly surprised by the quality of the editing and of the articles.

The evening ended with the brotherly feast, in the same building as the temple. Another novel experience: aside from the traditional toasts, the members of the host lodge, but also a part of the visitors performed artistic moments, especially songs, and finally all together the participants intoned “God save the Queen”.

In its entire ensemble, the visit to Edinburgh was an especially pleasant experience, aside from that of an outing with the brethren outside of the places where we usually meet and an opportunity to know ourselves better and to see one of the most beautiful cities of Europe, adding especially that of an enrichment in the spiritual plane through the drinking directly from the spring of the history of masonry.
A “must see” for any freemason who desires to find out more about himself and about the brotherhood to which he belongs.