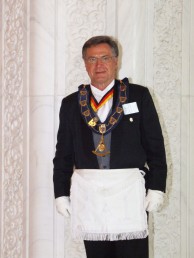 You have been for the last 9 years Grand Master of the United Grand Lodges of Germany. Please, let us know your vision regarding European/global Freemasonry. Your credo.

During the time of my office I got great experiences regarding the relationship of brethren coming from different Grand Lodges and different countries including their historical background and development. The European freemasonry is the strongest, based on fulfilling the conditions as given by the old landmarks. As a similar and probably compatible praxis in performing the goals of our worldwide bound I have seen in Latin America. Those brethren told me, that their feeling is near the European freemasons.

Which are the major changes in Freemasonry, what are the expectations? What changed in a major way?

As more open to the civil society as more progressive the freemasons are seen in the public.
This will be the future of our bound in the actual century and our position in the acceptance, when we are not blind to the problems of the present. In the past we remember always brethren who are doing so, having been active and trying to overcome the problems in the former society. The membership in Lodes and Grand Lodges is increasing, when those brethren are feeling responsible to interfere when recognizing inequality in the community, in the society.
On the other hand the number of members in Lodges is reducing, when their most conservative positioning is the gold standard in the live of this brethren.

The development of Freemasonry in Latin America, Africa and Eastern Europe changed the “balance of power” in our global fraternity. The position / plans of the countries with traditional Freemasonry (e.g. Germany)?

As mentioned before it is my experience to go on in that strategy as we did during the time of my office. Our policy was “active opening to the society”. The result was a much better acceptance in the public.

When you are watching the daily TV-news, reading the reports in the newspapers it is quiet clear. We have a lot of social problems in the world. So the responsibility nowadays is similar as it has been 100 or 200 years ago. We are ask to help, to support, to interfere when ever it is possible or necessary, as those freemasons did, which we like to quote to often when ever we feeling to do so.

In the next years will be major changes within Freemasonry? How do you see our Craft in the next decades?

The foresaid description making clear, that there could be a change , if we would actively realize our goals, which we repeated very often in our ritual talks. We should understand that our intension on the rough stone finally will have consequence to act in the civil society