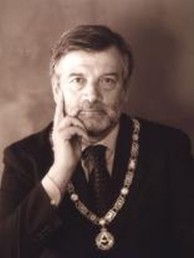 In today’s global world the historical role of religion has once again taken centre stage, especially if we compare the current situation with what we were facing twenty odd years ago. Unfortunately this situation reflects the growing ideological radicalisation of several religious movements as well as the use of strictly denominational issues to justify violent terrorist acts or even simply to assume intran­sigent, intolerant and viciously unilateral positions within society. This proves that reli­gious issues and the relationship between different faiths is a sensitive and burning issue topic for peace in the world and a better quality of life in the twenty-first century.

I am particularly pleased that the conference organisers have had the intellectual courage to tackle issues such as interreligious dialogue and peace between very diverse denominations and propose an inherently difficult topic, especially for freemasonry which traditionally avoids discussing issues with inevitable political and religious implications. However, perhaps it’s no accident that the open multicultural approach of the Grand Lodge of India where perhaps the most diverse and oldest religious traditions co-exist – has set this excellent example, especially because you have so much to teach given your prestigious, fascinating and complex history in the world of freemasonry. Then again, the urgent problems which have arisen in recent years closely affect our lives and the life of our Grand Lodges, so it would be futile to try and hide behind a convenient neutrality without trying to propose albeit with our usual composure and poise – a critical assessment of reality and, at the same time, indicate a way forward for our brothers and the community in which we live and work.

Freemasonry is closely related to what is sacred, to a spiritual quest; to live the initiatic freemasonry experience without this point of reference would be meaningless. Our continuous reference to the Grand Architect of the Universe is a powerful commitment because it requires Brethren to relate to each other using deep-rooted dialectics. These dialectics and exchange include general, and at times absolute, convictions and personal doubts based on reciprocal respect, legitimacy, and profound intellectual dialogue. Our common goal is the search for truth, a search which involves participation and openness towards diversity, also and above all religious diversity. This diversity – I’d like to stress this point – should be considered as an enriching experience, and not confrontation or obtuse antagonism.

Although we might be different and sometimes follow very diverse theologies, religious philoso­phies, cultural customs, social ethics and eschato­logical visions, getting to know one another better, or living in a new community of Brethren united through the Grand Architect of the Universe, is in itself one of the most extraordinary mysteries of Masonic sociability and the reason for its centuries-old success. A brotherhood of men who are different but work together to achieve a higher synthesis, to create something greater, something which respects diversity and historical disparities and merges them in a rainbow that rises from the earth towards the heavens, a heaven shared by all men of good will who have come together in spiritual communion under the star-studded vault of the Temple of Freemasons.

Freemasonry proposes a process of introspection; it is an instructive and self-instructive method which, first and foremost, involves listening to oneself and others. Active and passive tolerance and openness towards multiple cultures and multiple religions have allowed an esoteric school (albeit established in a continent – Europe – that has Jewish and Christian roots) to move beyond these denominational boundaries and become the driving force behind modernity. How was this achieved? by using a universal language to which all our Brethren can relate, whether they be Hindu, Sikh, Parsee, etc. This is the inclusive language that inspired the establishment of our modern, representative democracies and the secular nature of the State and society; it is a language that allows all religions and faiths to carry out their tasks and obligations without imposing a domineering, all-encompassing, or worse, totalitarian, exclusive and excluding vision on citizens who are different from one another. When Europe and then the rest of the world broke free from absolutism and totalitarianism the break involved the freedom of religion, the freedom of conscience, and respect for all and every philosophy that sets aside purely theist solutions and searches for truth and the good of humanity.

An open society, capable of embracing diversity on the condition that everyone accepts the principle of mutual respect and reciprocal tolerance: since it was founded, this is one of the greatest gifts ever given by

Freemasonry to modern society. We must be extremely mindful of the intrinsic greatness of Freemasonry because all the enemies of modernity, as well as all seditious movements, will soon rise up against us, against all of us. These enemies and movements fight for the supremacy of a single religious truth, they force it on society as a whole and reject and condemn the fact that we all have the right to think differently. We are not the ones who want to be involved in unorthodox topics; it is reality – above all unpleasant and threatening reality – that comes knocking on our door. Reality doesn’t knock three times like those who wish to be welcomed into our rites; it knocks violently like those who reject modernity and the multi-religious and universal tolerance we represent.

Freemasonry represents, and has represented in the past, a cultural and sociological model that successfully combines and merges the complexities of multiple communities and different, and seemingly irreconcilable religions, spiritual orientations or philosophies. We must endorse and promote this outstanding achievement vis-a-vis our Brethren and the outside world.

Towards our Brethren, because not everyone is fully aware of this great achievement or perhaps they fool themselves into thinking it will last “forever“; perhaps they don’t realise that the battle for freedom and democracy is never over, or they may think we no longer need to continue reiterating the importance and justness of what we have achieved in these long hard years of our history.

Towards the outside world, because Freemasonry proposes a civil, instructive and formative model for citizens.

Of course we are neither an employment agency nor do we lavish illegal favouritisms; our goal is to work for the advancement and well-being of humanity, first and foremost as an institution capable of shaping new generations of young people, respectful of tolerance and multiple cultures, educated to be curious, to search, to dialogue, and to respect and enhance diversity. A generation of citizens ready to tackle the challenges of the future, not a privileged community hiding behind the name of a prestigious tradition in order to avoid facing the challenges of modernity called into question by religious fundamentalisms.

We must not be afraid of being accused of “relativism“, or any other kind of “ism“ – a sound so distasteful to the ear. Freemasonry is open and tolerant, not because it is relativist, but because it is not a religion, and therefore doesn’t offer its own dogmas or sacraments of any sort; it is above all a group of men, each with their own religion and philosophy, who freely adhere to it. Which means we are relativists only in so far as we must be able to welcome different men, men with different values and religious dogmas. In other words, Freemasonry is not dogmatic, because each Mason can allow himself to be dogmatic – if he chooses – about his faith, even if what sets us apart should, instead, be the fact that those of us who have become Masons did so because we wanted to question ourselves, we believed that confronting our faith with the faith of others was a useful exercise. We are united by the search for diversity, as well as by our interest and desire to broaden our horizons

Our relativism is a relativism of dialogue and searching; it opens our hearts and minds; it makes us ready to understand where we’ve made mistakes or change our point of view when we discover that what we thought was the truth, was instead bogus. Our faith has critical and philosophical overtones because it is open to the enchantment of discovery, searching, study, and mystery, even if we all sail from our own ports, our own lives, traditions and beliefs. On the contrary, new relativism is the stubbornness and narrow-mindedness of religious denominations – and not that of a charitable and dialoguing faith – in other words, it is the authoritarianism of those who want to impose their own point of view and their own laws.

In fact, we tend to forget that those who opposed the discovery of a heliocentric system in the name of a forced and literal interpretation of texts considered as “inspired“, clung to a closed, nonnegotiable vision of what the world looked like; they were imprisoned in a frame, incapable of breaking out of that prison even when its parameters became scientifically indefensible. They could have killed Galileo, they murdered Giordano Bruno, but in the end even they had to admit that the earth ours revolves around the Sun and that the universe is not just the one we can see with our own eyes. In other parts of the world, in the name of religion and God people shoot young girls who want to go to school and fight to defend their right. We cannot turn away, not least because the God in which all Freemasons believe is greater, and neither persecutes children nor denies them their right to dignity and respect.

We still have a long way to go; there is still much to do; but together we will almost certainly be able to make our authoritative and prestigious voice heard in the world. If this voice comes from the mouths of men who belong to very different faiths and cultures – if it is the end product of a cautious combination of tolerance and dialogue – then perhaps it will be more like the voice of the Grand Architect. A voice of peace and optimism in defence of a secularism that really guarantees universalism and peaceful cohabitation between different communi­ties and traditions. In an open, respectful society, based on the centrality of men and women, we must never consider our neighbour as a means, but rather the reason for all our efforts. If Masonic anthropology is possible and practicable, then it lies in dialogue and the mutual acknowledgement of the dignity of human beings and the multiple and persistent diversity we use in our search for a common truth.