SGC of the Supreme Council of AASR in Germany;
Vice-President of the Confederation of the S.C. for Europe 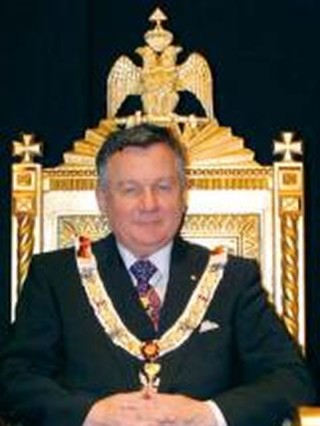 The Romanian Scottish Rite members are privileged to have here in Romania the experience of the degrees. That’s very rare in the world. Usually, people can participate in one or two degrees in each of the “departments” of the Scottish Rite, which means: Lodge of Perfection, Chapter Rose-Croix, Areopagus with the philosophical degrees until the 30th degree –, and then the 31st and the 32nd, which are combined in the Consistory, and the 33rd and last degree. In Germany, we work in the 4th degree, in the 13th and 14th degrees, combined in one ritual, we work in the 18th degree with a preceding introduction into the previous degrees of the Chapter, and then we work in the 30th degree, where we convey the degrees in-between just by communication, and then we have the Consistory, which combines the 31st and the 32nd degree.

But here in Romania it is possible for members to have the experience of many degrees in a psycho-drama, which is very lively, which has underlying music, and that’s not only rare but it’s exceptional and it’s an extraordinary experience given by your Supreme Council to the members of the Scottish Rite. I think that’s really great and gives them a wonderful opportunity. Your Sovereign Grand Commander calls it research meetings. He combines the research of the members of the Scottish Rite in history, ritual and symbolism with the actual experience, and both have a deep impact on the soul. It makes it possible for those who attend to be inspired, to make their research on their own, to follow this route – this path – and that’s very good! You know, the Scottish Rite is a way of research. You’ve got such a fullness, such an abundance of Rituals and Symbols, that you need a whole life to approach them, to interpret them for you, to give them meaning and effect on your life, and fathom the deeper meaning. We have very, very many levels of interpretation. A life is not enough to come near to all of them! 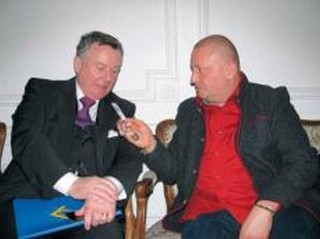 I think the ideas behind are very different. You have Mediterranean Supreme Councils, which were fond of the idea very much from the start. They said, we have the old Rituals, we are old Supreme Councils and others should follow us. And therefore we are models, so to say… The Confederation wants to collect information about the history of Supreme Councils and their rituals.

The European Union is very dissimilar, very heterogeneous. There are powerful voices over others. Is it possible that the same risk will exist here, into the Confederation, to have few more significantly profiles compared with others?

I make the joke – that we follow the rules of public international law of the nineteenth century – and there we are – it’s the law of sovereignty. And certainly, a last idea worth mentioning is that, following the developments you mentioned, about the European Union, there should be a certain movement of the Supreme Councils to be – not on the same level – but try to go in a similar direction as the European Union, to make a step in this direction.

How do you see the perspective of the Confederation in ten or fifteen years?

They do. The European Grand Lodges want to make permanent their Conference, which would mean – that there will be a stronger link between them.

You are a public person, an official in Germany. How does it work, how is it possible to be both a public person and a leader in Freemasonry? In Eastern European countries, the officials do not claim their belonging to Freemasonry…

I understand the question. You know, the British had the problem; they prohibited for some time the Civil Service from being members of the Freemasonry – policemen, judges etc. We have a very different situation in Germany than here in Romania. From the beginning, Masons were involved in reforming the country. This situation is completely different from Germany, where the Nazi fought with success against all liberal, i. e. freedom oriented organisations. The Nazi gave a bad image to Freemasonry: they are secret persons, they are dealing in the underground, in the dark – this is effective until now, and therefore the number of members diminished considerably after the Second World War.

One of our Grand Lodges, which had 20,000 members after the First World War, has now only 700. And if you look at our Grand Lodge, the Ancient and Accepted Freemasons of Germany, has about 10,000 members and German Freemasonry has all in all 15,000, maybe a bit more, with its Federation of five Grand Lodges, one just mentioned was founded by Frederick II of Prussia in 1740, the Christian Zinnendorf System near to the Swedish Rite – and the lodges of occupation, American-Canadian and British Freemasons in Germany, they form 50,000 members. That’s not very much for a country with 80 million inhabitants. And the Freemasonry has not an important impact in Germany, not comparable at least to Romania and therefore it’s just a sort of club membership and it doesn’t seem to interfere with public interests. And certainly, it would never be allowed to work against the political loyalty. That’s our view, that we are beyond politics. And therefore it’s well known in public – I’m on the internet, as you know. My Masonic commitments are well known in the Ministry where I’m working, but it’s not seen as a hindrance – to hinder the performance of my duties as a civil servant.

Finally, let us know your Curriculum Vitae, both profane and Masonic.

I made my law studies, then I was a judge – very young – I was 25. And went – 1988 – to Bonn, to the Ministry of Justice; first as detached, then as permanent. I worked on different things as international procedural law, international private law, national civil law of procedure, code of costs. Then in the division of public international law, where I’m still – and it’s extremely interesting, of a great variety, dealing with international conventions and organisations, The International Criminal Court, The International Tribunal of the Law of The Sea, the questions of piracy, the questions of protection of environment. It’s an enormous variety – all sort of problems – and we are acting as consultant to our Ministry and to the other Ministries.

I started my Masonic career in 1971, I’m now a member for more than 40 years. I have the Golden Apron of 40 years’ membership and I think I was introduced into the Scottish Rite, if I remember rightly, in 1976. I became a 33rd degree in 1998. I started in 2002 in the Supreme Council, as the Grand Captain of the Guards who is the Minister of Justice, so to say – competent for the Internal Law. I made a law reform, the Constitution and the Act regulating our Ateliers, and then I became the Grand Secretary General – which is the Minister of Foreign Affairs – for three years, again, and then I was elected Sovereign Grand Commander, in 2008. We have a three years period. And I entered now my third period. And yes, it’s an extremely interesting work. I can manage to do it, besides my professional obligations, but sometimes it’s not easy to combine the two.

I am convinced that someone can be a member of the Supreme Council only if he is a good team worker.

And therefore we have an excellent team, as you need to have, a Grand Chancellor who is helping with all questions of membership and a very good Lieutenant Grand Commander, who deals with internal problems if there is a problem with members or lodges or chapters, then he goes there and he tries to moderate, to mediate. That’s very good – people you rely on – who work together – and I am in good contact with my predecessor. External affairs is an affair of the Sovereign Grand Commander and therefore I’m traveling a lot, yes.

I wish all the best for the Ancient and Accepted Scottish Rite in Romania, that it may have a beneficial and blessed effect on its members and always act wise and for the best of the country and mankind.