ALEXANDRU ENACHE: Masonry before the appearance of the Grand Lodges 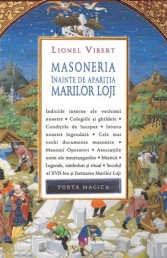 When and where did Free­masonry appear? Which are its origins and how did it evolve? No one can answer these questions with certainty. On the other hand, these is a gigantic volume of fantastic theories, assumptions and concoctions which can place in some difficulty even the most rational among us.

Translating this book, I became aware that Lionel Vibert wrote it out of a desire to shed a bit of light on this subject, perhaps also under the sway of an exasperation produced by the deluge of aberrations, well- or ill-intended, said of Freemasonry.

The first document in which a clear reference is made to Masonry is the Regius Poem, written around 1390. As to how the Order has evolved in the ages previous to that date, there are only legends and assumptions, some of which are embarrassment. There is no need to discuss them here, as the author has taken care to analyze them in some detail.

Most of the Masonic researchers and scholars hold the opinion that modern Masonry developed, directly or indirectly, from the brotherhoods of the stone workers, which built the great cathedrals and medieval castles of Western Europe.

There must have existed some mode of organization of the operative masons of the Middle Ages, at least in England, where, after the Norman Conquest (1066-1086), in a relatively short time, thousands of religious sanctuaries very similar in size, style and architectural proportions were built. This thing could not be realized in the absence of an efficient correlation and commu­nication between the different groups of masters that have erected the respective edifices.

With all these things, even if we have sufficient indications that apparently demonstrate a direct connec­tion between operative and speculative Masonry, as in the case of Darwin’s theory, there are some “missing links” which are yet to be found, given the lack of sources regarding operative Masons in Medieval England, there being only a few documents regarding the ones in Scotland.

Lionel Vibert has attempted to navigate as well as possible these muddy and sometimes troubled waters, limiting himself to taking into consideration only the information contained in historical documents and settings aside the assumptions and speculations, some evidence of which is the very rare utilization of the words “probably” or “possibly”.

Unlike the author, who says in the preface of his book that he has tried to avoid footnotes as much as possible, I have been forced to introduce more than 100. I have considered that it is necessary to offer a minimum of information about the personalities and historical events under discussion, to help reader to create for himself as clear as possible an image of the historical context. For as easy as possible lecture, the footnotes are concise and to the point.

The book is addressed not only to those interested in the old history of Masonry, but also to those who have a passion for history in general, being a novel peripety that starts from the Biblical ages, passing through Egyptian, Greek and Roman periods, presenting aspects of life of the craftsmen of the Western Middle Ages, and it goes through different periods of the Medieval history of England and ends in 1717 at once with the formation of the first Masonic Grand Lodge in the world.

I close by thanking everyone who has been by my side throughout the achievement of this work, my family, my colleagues and my friends, as well as the representatives of the renowned publishing house where it is published and I hope that this book will help the reader to see in a different light the initial ages of Masonry.