OCTAVIAN RADU: At the Gates of the Orient

Continuing the tradition of the Edmond Nicolau Lodge of under­taking a Masonic excursion beyond the country’s borders each year and to have the privilege of sharing Masonic experiences with our Brethren from other Grand Lodges, in October 2014, we went on a visit to Istanbul, the city placed at The Gates of The Orient. Istanbul, known in the old times as Constan­tinople, was and has remained a commercial, cultural and artistic, but also a Masonic bridge, connecting Europe and Asia. On this occasion, Brethren of the Golden Square or Ion CampineanuLodges also joined us in our Masonic journey. An equally great joy was having the Brother Alan Turton alongside, in his capacity as honorary member of the Edmond Nicolau Lodge no. 257 from Bucharest. 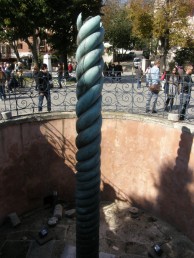 In this city full of history, it was given to us to find many ancient vestiges containing elements oftentimes re-encountered in Masonic temples and their symbolism is maintained almost unchanged. All these things show us that masonry could have its origins also in the culture and he thinking of the ancient world. A first example is the spiraling column in the Golden Horn of Istanbul itself, the column which seems to bear an artistic resemblance to the column of the apprentice in the Rosslyn chapel. The spiraling column is undoubtedly one of the oldest artifacts which have survived from ancient Greece and Rome, as it is approximately 2500 years old. Initially, this column constituted a trophy and guarded the temple of Apollo in Delphi. This column was later moved to Constantinople by the emperor Constantine the Great in the year 324 C.E., later becoming a part of the renowned hippodrome of Constantinople in the Ottoman period. Not far from the serpentine column is the obelisk of Theodosius. The Obelisk of Theodosius is, in fact, the old Egyptian obelisk of the Pharaoh Thutmose III, which was brought by the Roman emperor Theodosius I in the fourth century C.E., also as a part of the hippodrome of Constantinople. This obelisk has an interesting history, as it was raised by Thutmose III (1479–1425 B.C.E.) in the Southern part of the grant 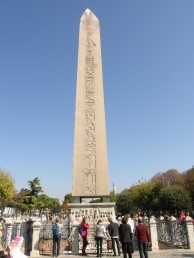 Egyptian temple in Karnak, later ending up in the Circus Maximus in Rome, and then, at an ulterior date, being brought by Theodosius to the hippodrome of Constantinople. What is interesting to observe is the fact that the obelisk, this symbol of the
axis of the world – “axis mundi” find itself in almost all the great cities of the world, like Washington, London or Paris, as it is one of the central symbols of the third degree of the Rectified Scottish Rite – “Deponens aliena ascendit unus”. 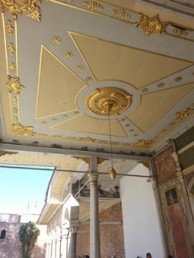 Not far from the column and the obelisk is the Topkapi place, which was the principal residence of the sultans of the Ottoman Empire for almost 400 years (1465–1856). Here, right at the entrance, one can notice the plumb rule that shows the vertical of the place, an element found in blue masonry, irrespective of the rite. The plumb rule is used in constructions even from the oldest times, being used as the vertical line of reference which helps the constructors to raise vertical walls. In masonry, the plumb line represents, as well, moral correctness, human verticality, which is one of the work instruments of the Worshipful Master, and also the justice of the right of the Grand Architect of the Universe – in some of the rituals of the passage to the second degree, there are even quotes from the Bible when reference is made to the very strict justice of God onto the people of Israel. As well, in Christianity, in the time of the liturgy, the right faithful stand on their feet (alike to the plumb line), which represents symbolically the resurrection of the Lord on Sunday.

We cannot, however, close our section on the Masonic symbols without mentioning the Hagia Sophia, an old Greek-Orthodox Christian Church, which became an imperial Mosque later only to ultimately become a museum in 1931. Just like, in Masonic temples, we find, on the altar of oaths, the holy books of all the confessions of those present at that moment in the Lodge, so also in Ayasofya, we find both Christian symbols on the walls (cherubs, the Holy Virgin with Child…) and Islamic elements as well, such as the eight medallions bearing the name of Alah, of the prophet Mohammed, of his two nephews and of the four caliphs. What is very interesting to observe is the fact that the Church was dedicated to the Wisdom of God, of The Logos, the celebration of the patron of te Church, of the Logos, taking place on December 25, when the Logos was embodied.

The Grand Lodge of Turkey

Turkish Masonry appeared even in the 18th century, when, somewhere near the Galata tower, the first Masonic Lodge was founded in 1721, by some merchants coming from the Levant (in their greatest moiety, Genovese). Although its existence is attested, the name of the Lodge has been lost.

The development of Masonry in Turkey until its present days took place in five great stages. In the first stages, a number of Lodges began to appear in the time of the Ottoman Empire, but these were not internally organized, but rather had a management organized from beyond the Empire. All these are owed to the Sultan Abdul Hamid, who systematically impeded the internal organization of Masonic Lodges. A second period of development took place between 1909 and 1935, starting with the abdication of Abdul Hamid and continuing with the taking over of political power by the Masons. To integrate better, the local lodges, led from abroad, for the first time took on a national identity, such that their existence became better assimilated by people.

On March 3, 1909, the Supreme Council of Turkey (1861), then lying in dormancy, was reactivated and this Supreme Council consecrated four Turkish Lodges, plus three Italian, two French, one Spanish and another two from Egypt. All these newly-consecrated lodges composed together, on August 1, 1909, the Grand Lodge of Turkey, and the man who became the first Grand Master was Mehmet Talat S. Pasha (who later also became Prime Minister).

A third period took place between the years 1935 and 1948. In 1935, president Ataturk ordered the shutting down of all the Masonic Lodges, on the basis of the idea that they had destructive intentions, controlled from beyond, such that the Grand Lodge of Turkey entered into dormancy. This entrance into dormancy was merely official, whereas unofficially Masons continued to undertake the activity of the Lodges, in hiding.

The fourth period was between 1948 and 1966, when the Masonic activities were reborn and were intensified in two directions, in the Scottish Rite and the French. The last period, from 1966 to our days, the Grand Lodge of Turkey became increasingly more powerful, better organized, coming to gather 18,000 members and over 250 Lodges.

Throughout the duration of our time in Turkey, we had the pleasure to participate in two common meetings of high class, one of an English-language Lodge and the other of a Turkish-language Lodge.

The Freedom Lodge no. 35 is the only English-speaking Lodge in Istanbul, having been founded as far back as 1961. The Freedom Lodge works in the Turkish ritual, which is in its greatest part based in the modern Scottish ritual, with some influences and additions from the French and Schroeder rituals. The Freedom Lodge no. 35 is one of the three Lodge in Turkey to work in the English languages. Here, I had the great surprise and pleasure of meeting, in a common meeting, the English Brethren from Mandate Lodge no. 4258 in London, this being also a twin Lodge of the Freedom Lodge in Istanbul. As well, we had the honor of meeting the Worshipful Master of the Mandate Lodge, Ali Ihsan GOREN, an Englishman of Turkish origin, a thing which more stronglyconsolidated the friendship connection between the two Lodges. In the framework of this special meeting taking place under the gavel of W.M. Servet Firat, a conference also took place, titled “The Power of Two: Anglo-Saxon and Turkish Freemasonry”, a conference in which a comparative analysis of the rituals of the 1st degree practiced by the two twin Lodges was analyzed. The entire meeting also benefitted from the presence of the Immediate Past Grand Master of the Grand Lodge of Turkey, I.P.G.M Bro. Remzi Sanver. Bro. Remzi underlined, at the end, making reference to the differences between the two rituals previously analyzed, that the great power of Masonry lies in diversity, and the great force of the Grand Lodge lies in its flexibility and its power to adapt to the times.

The Kultur Lodge no. 2 is one of the oldest Lodges in Istanbul, the second oldest in Turkey, active even since 1948. There, we assisted in a Ritual meeting led impeccably by W.M. Ufuk Denzici, in the framework of which we observed very many similarities between the ritual practiced by the NGLR and that practiced in the Turkish Lodges. At the same meeting, a paper was delivered on architecture, presented by Brother Bekir BEKİROĞLU titled “Man’s Greatest Enemy is His Soul” – “İNSANIN EN BÜYÜK DÜŞMANI NEFSİDİR”, which made an analysis of the human spirit, both from the point of view of the cultures of the ancient civilizations (Mesopotamian, Egyptian, Greek or Roman) and from the point of view of the philosophy.

I would not want to recount more about these meetings, because the events we experienced during these meetings cannot be described in words, as they must be felt by each Brother who participates in such Masonic events. But I can encourage each Brother who goes to Turkey o visit the local lodges, either the English-language or the Turkish-language ones, where he will be received with great friendship and will take part in unforgettable moments.

This was the interesting Masonic adventure of the Brethren of the Edmond Nicolau Lodge no. 257 of the Orient of Bucharest at the Gates of the Orient, an adventure full of masonry, history, brotherhood and culture. An adventure in a region in which Freemasonry combines in a unique way Oriental spirituality with European practices.

OCTAVIAN RADU: At the Gates of the Orient