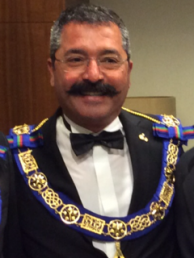 Most Worshipful Brother Aras, please let us know about National Grand Lodge of Azerbaijan (when was founded and which Grand Lodges founded your GL, how many members, how many lodges, international recognitions, Appendant Bodies in Azerbaijan etc

Since the consecration of National Grand Lodge of Azerbaijan many candidates have been interviewed and approved by the lodges, and all of them have already been initiated, passed and raised by the lodges. There is also a large list of prospective candidates to be considered. Due to the sensitive political situation in Azerbaijan, the candidates are selected in a very careful way and after a number of interviews and a long waiting time.
There are monthly and quarterly meetings of the lodges and a semi-annual meeting of the Grand Lodge. The main annual Communications of the Grand lodge is on the last weekend of June.
The National Grand Lodge of Azerbaijan is recognized by most European Grand Lodges and many American, Canadian, Latin American Grand Lodges. Over fifty Grand Lodges including Grand Lodges in Brazil recognize NGLAZ.
There are no appendant bodies yet in Azerbaijan, although some preparation to establish the Supreme Council of Scottish Rite has been done.

I would like to know your Masonic vision, your strategy as Grand Master.
I was installed by three Grand Masters: MW Robert B Heyat, MW Andrey Bogdanov of Russia and MW Rudiger Templin of United Grand Lodge of Germany.
As a newly elected Grand Master I will follow our Vision and Mission.

The Mission of the National Grand Lodge of Azerbaijan is to teach and perpetuate a way of life that promotes the Brotherhood of Man under the Fatherhood of God and to assist Lodges to grow and prosper, based on our Masonic traditions and Landmarks.
The Vision of the National Grand Lodge of Azerbaijan is to be the premier organization composed of men of integrity and character, who are honest, true to their word, believe in God, are devoted to family, charitable in their community, and courteous and helpful to each other.
In order to be successful in this mission and ultimately realize this Vision the National Grand Lodge of Azerbaijan has defined a strategy to guide our main activities:
The Grand Lodge provides self-improvement and leadership training for those members that have advanced beyond the Master of their lodge, and prepares them for positions of greater responsibility within the fraternity.
The Grand Lodge Officers are seen as prudent and effective leaders that guide the fraternity by precept and example.
The Grand Lodge is providing leadership, support, administrative guidance, and acknowledgement of accomplishment to the Lodges in the jurisdiction. An effective membership program that attracts a larger number of high-quality candidates for membership.
Grand Lodge and constituent lodges are financially stable. The Grand Lodge will monitor members, lodge activities for compliance with the National Grand Lodge Azerbaijan Masonic Code and advise member lodges on conformance issues.
As we are able to realize significant progress toward these objectives, we will draw closer to the ultimate Vision of National Grand Lodge of Azerbaijan. “… to be the premier organization composed of men of integrity and character…” and we will keep safe the future of our craft so that we and our successors may continue to receive the joys of friendship, morality and brotherly love.

Let us know your Curriculum Vitae, both Masonic and profane.
I was Initiated and Raised to the Sublime Degree of Master Mason in Bilgi Lodge, No. 15, Ankara Turkey. Continuing the Masonic tradition in my family, as third generation in 1989.
I am one of the founders of Nur Lodge 2000 and Azerbaijan Lodge 2001, member of couple of lodges in Washington D.C. and Romania, Turkey and Azerbaijan. I served my lodges in every position throughout the years.
Since we established our Grand Lodge, I was Assistant Grand Master for Foreign Relations. I represented National Grand Lodge of Azerbaijan in many grand communications and world conferences.
In my personal life I am a businessman since 1984, working different sectors internationally. I have one daughter one son living in Newyork.