ROBERT B. HEYAT: Freemasonry is my life

I turned the interview granted by MW Brother and friend Robert Heyat into a story marked by some subtitles that I thought were essential. (Claudiu Ionescu) 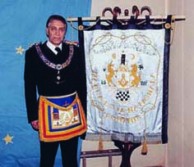 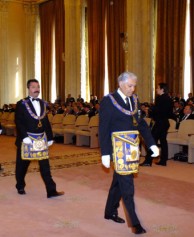 I have established the concept of international, mostly universal Freemasonry, in Washington, D.C. – and since 1985, I have established there, together with the leadership, of course, of Washington, D.C., twelve international Lodges, and speaking in twelve different languages, each, I know, speaking Farsi, Azari, Turkish, German, Filipino, Spanish, French, Italian, Scottish. Different context, you know, different tradition… And this has been a great joy, I am so proud of doing this, as part of my Masonic life. In 2007 I was elected Grand Master of the Grand Lodge of Washington DC. I was also the very first Grand Master (being the founder) of the Grand Lodge of Azerbaijan.

Disappointment in Freemasonry
My biggest disappointment in Masonry? I said this in the World Conference in Cartagena, in my speech and I said this also in the forum of the Grand Masters in Bucharest in 2014: unfortunately, Freemasonry has no influence in the world, because of no action. And this no action mostly comes from two things.
First: internal, personal egos, and infighting which prevents solidarity. Within each Grand Lodge and within the greater Freemasonry. They do not support each other, really. They are all involved in bureaucratic things, which are not reasonable. Let’s say, for example, Azerbaijan, or Armenia – where Masonry is established in such difficult conditions. It is normal that every Grand Lodge in the world, especially the old and big Grand Lodges, to come to help the new born Grand Lodge, to promote that Grand Lodge and to support it; but they take a distance! What is this? Why? If our duty as Masons is to bring the light of Masonry into the dark places, you should receive support. But no support! It takes years with this silly thing called recognition. I mean, if a Grand Lodge is constituted in a Regular manner, under the basics of the principles, with the traditions, then why do you have to wait? Just imagine, in a country like Azerbaijan, with the religious dominance, Shiite, and the political background – the Soviet Communist background… This is a country where Masonry can make a difference! Masonry cannot make much of a difference in a country like England, or in the US, because a lot of the fundamentals and the principles of Freemasonry are in coordination with the principles which are done in the society. That is where Masonry should be helped and supported, and that is why I am disappointed in this respect.
Secondly: not having any action by the old Free­masonry. Freemasonry, within ourselves, is all the time a talk. Talking about philosophy. I have spent my life in philosophy and esotericism. But this is not something good for the society as a practical thing. The practical thing is to engage with the society. To engage, and not be afraid of labels. We do not need to be political. We do not need to take sides in politics.
But we have to engage in the real issues – which is the challenge for the young generation, for the future generations and for the present generation! If we do not engage nowadays the professionals, the young people… In each country, the young people is so busy just to run own lives, they have to make a big sacrifice just to come to the Lodge. Unless you can present them with something of real value, why should they make that sacrifice? That is our problem! We are not presenting them with something of value, so that they get motivated.
We say that we try to transfer what our ideals are, through individuals, to the society. But we are not doing that. We are not presenting that to the intellectuals, to the professionals, to the young generation, who are active in the society. And that is the second issue of my disappointment.

My profane life
Thanks God, I should say that I have been very successful in my business life also, but – and my political life. Since I was very young, I was a director of the National Iranian Oil Company for all the engineering division and the contracts division. And then I became the Commerce Ambassador for Europe, and at that time I was only 30 some years old. I think I was quite successful, but – well, if the revolution had not happened, nobody knows what would have been my future, in Iran.
I have two hobbies. One is reading and writing, the second is Masonry. The most important is Masonry. But as priorities, I think family and country are first, and then Freemasonry.
Of course, I have a lot of businesses. But I never mix businesses, self-interest, with Masonry. Never. That has been my principle in life. So these are completely separated and, thanks God, it has been going on very well.
I do not carry an Iranian passport – because of certain reasons. But what I am saying is this: you never lose your allegiance and your love for your mother country. You never lose that! No matter how long you are away from your mother country.
The United States provided me all the protection, all the services, and then my grandchildren were born here and they were raised here. There is another attachment. I feel American as anybody else; I also try to give my descendants the heritage of the Iranian tradition, the Persian tradition. I love both America and Iran. And I hope that the day does not come, when I have to choose.

It’s, first of all, my honor and pleasure to be part of Romanian Freemasonry. I started coming to Romania in 1992, when the new Romanian Freemasonry was established here. At that time, there were different groups of freemasons. So my job was really to bring all these groups together and unify them. And so we make the real National Grand Lodge of Romania.
Of course, that took quite a long time and I had to come many times to Romania to do that. But, well, as you know, from 1992 to, probably, to 2000, we went through ups and downs in the Romanian Freemasonry. And we had some very difficult times. Actually, there was a time that there was a possibility that Romanian Freemasonry could lose its Regularity and its Charter to be withdrawn by which was given by, di Bernardo, at that time Grand Master of Grande Oriente d’Italia. My very close and dear friend, Most Worshipful Gustavo Raffi, told me that if something is not going to change in Romania, then we have to probably withdraw the Charter. We went through a lot. By the election of the Most Worshipful Eugen Ovidiu Chirovici the things had started to change. When you go through a transition from a previous status and attitudes and environment to a
new one, there are always problems. As I said, during the Grand Mastership of Most Worshipful Chirovici, everything had started to change. The National Grand Lodge of Romania is taking a very prominent role in Europe. As one of the founders of the National 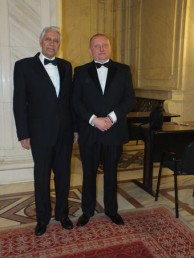 Grand Lodge of Romania, being also the very first Honorary Grand Master Ad Vitam of your Grand Lodge, I feel so proud to be a part of you.

I should congratulate the editor of the Masonic Forum for producing a very distinguished and exceptional publication in the Masonic world. First of all, the quality of the magazine itself, the print and everything, is so really high level, and also the articles. It is presented in such a beautiful way and, I think, it could have a big influence. What I am recommending is that the Masonic Forum needs to continue to be distributed to all the Grand Lodges. I personally think that is the best presentation and reflection of what is happening in the Romanian Freemasonry and I am really proud that such a publication is being done.