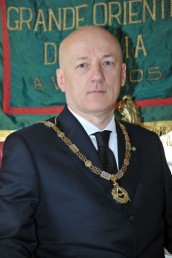 Most Worshipful Grand Master and dear brother Stefano, which will be the line that will go as Grand Master of Grande Oriente d’Italia?
I will try to go on – on the same line, on the same policy as Gustavo Raffi, with this policy of transparence towards the public interest, with all these kind of events in universities and public places, a major involvement within the civil society. We will not neglect the charity. For example, our Deputy Grand Master is the chairman of a night asylum, who basically gives to eat to people who are in need, and it also gives shelter to people who are without houses and it serves hundreds; it gives hundreds of servings per day to people in need. Of course, Grande Oriente d’Italia is trying to help him. Regarding the internal activity of the Grand Oriente d’Italia, we will try to improve the ritualistic aspect of work in our Lodges, through multimedia instruments: DVDs and recordings; each of us has to understand and to practice the Art of Freemasonry.
The visit in Bucharest, in May 2014, it was the very first foreign Masonic visit for you as Grand Master, am I right?
Yes, it was my first experience abroad, because I was installed Grand Master in April 2014, as you know it, because you were there. And, of course, I am very humble and I would like not to express my feelings before having known better all the situation of international Free­masonry.
I notice that all the brethren of the Eastern European Freemasonries are very, very enthusiastic, and they are really willing to grow, and this will to grow was also witnessed by what the President of the Romanian Parliament said in the opening speech of the World Conference of Regular Grand Lodges: Freemasonry should be a vehicle, a vector of development of civil society. I think that especially in Eastern Europe, Freemasonry is really functional regarding this kind of projects and is really intertwined with the development of the civil society.
Do you think that Western Freemasonry is different compared to Eastern one? Do you think that nowadays world needs Freemasonry like in the past?
I think that every organization is peculiar to his area. Of course, the situation in Latin America is quite different from the United States, quite different from the European Freemasonry. But I believe that every society still needs Freemasonry. I like to depict Freemasonry as a bridge. The image of Freemasonry, in my opinion, is that of a bridge. You know, the bridge it is a building useful to connect people. Freemasonry is still able to give men who join Freemasonry the ability and the willingness to talk to each other. And today, even more, we need this kind of men to talk to each other, to be a bridge between each other. Our values are still actual and we should just keep our values, we have to put those values in the context of the actual situation. If even the Catholic Church is doing this, because they are still really, really anchored to those old values, but they are really making them more actual. If they are doing that, why cannot we do the same? 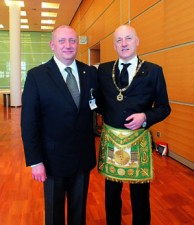 Being a journalist, what would be the question that you would ask yourself?
How would you like to be remembered after your five-year term as a Grand Master of the Grande Oriente d’Italia? And the answer I would like to be received is that: I woul
d like to be remembered as the Grand Master that made possible for brethren, once they left the Lodge, to feel the need to come back again as soon as possible.
Splendid, Most Worshipful Brother! Thank you for granting me the interview.
*****
Stefano Bisi was initiated into Freemasonry in September 24th, 1982 in Montaperti Lodge No.722 from Siena, where he was worshipful master. He was president of Siena Masonic Orient in the period in which brethren from Siena have crowned their dream to buy, with the support of Urbs, the Masonic Home. Elected as Senior Warden of the Council of the Order in 2005, resigned two years later, before applying, in 2007, for president of the College of Worshipful Masters from Tuscany, where it was confirmed in 2010. Stefano Bisi is member of the Scottish Rite and the Rite of York. Has been awarded the distinction „Giordano Bruno” class Athena.
Stefano Bisi graduated the Science of public adminis­tration in the Faculty of Political Sciences, from the University of Siena. Crowning a dream from his school period, Stefano Bisi became a journalist. He created the blog www.stefanobisi.it with the channel „Bisiradio” and directs the daily online www.sienanews.it. He is the author of several books including Mitra and Compass, dedicated to the relationship between Catholic Church and Freemasonry, Stradario massonico di Siena, as well as co-author of Sindaci in rosso, a publication edited by Vittorio Feltri and Renato Brunetta and Freemasonry F. A. Q.
Was awarded with the Order Merito della Repubblica. Also he received the awards: Paolo Maccherini, Giornalista sportivo dell’anno, Porsenna and Medioevo presente.