One of my Masonic godfathers, Dan Amedeo Lăzărescu, a distinguished personality with a vast breadth of knowledge, told me back in 1997, when I knocked on the Doors of the Temple, that “Masonry is like a big table, on which every man places everything he has and from which he takes what he needs”. In a crossroads moment of my existence, some three years after that, I made a choice and only then did those words reveal to me their truth. Owing to my experience in the written press, I realized that I could help the Craft by laying the foundations of a system of communications with the exterior. That is how the Masonic Forum Magazine was born.

I had the good luck to have in the lodge in which I was several men of vision, who understood the role of such a magazine and who, moreover, understood the opening at which I was aiming through a magazine with the bilingual status, in Romanian and English. My brethren were at one with me in this initiative, they helped me both morally and materially so that this magazine could appear. I thank them once again, at this stage in the journey taken by the Masonic Forum. 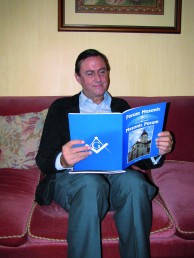 The narrow horizons of the some of the NGLR officers at that moment could have created some obstacles in my path as I was trying to continue to promote throughout the world a favorable image of Romanian Masonry. I endured with tenacity because of my firm conviction that what I had built was a good and a necessary thing, looking forward into the future, never allowing myself to be annihilated in the present. I owe much to my friends both in Romania and abroad.

Things began to change after 2003, when Bro. Eugen Ovidiu Chirovici was elected GM of the NGLR. He gave the magazine its due credit, transforming it from a particular initiative into the official magazine of the GL. Having the guarantee of the NGLR and the external support of several personalities of World Masonry, who elected to connect their names to the Masonic Forum, it was only natural that we grow. 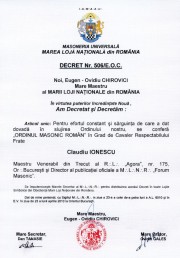 Naturally, MW Bro. Radu Bălănescu, the Grand Master of the NGLR since 2010, continued the work of supporting the magazine, being the man who traces the orientation of our activities and approves the content of the Masonic Forum.

Today, Masonic Forum takes its place in an elite, it is found in the most important libraries in the world, it is a magazine distributed to all the Grand Lodges with which the NGLR has brotherly relations, as well as to the most important Masonic publications and research institutes worldwide.

At the anniversary of the 50 issues of the Magazine, I wish that the Masonic Forum will maintain its standards, that it will increase continuously in what regards its quality, that it will boast more and more valuable collaborators and that it will enjoy hereafter the trust and the interest of the brethren.