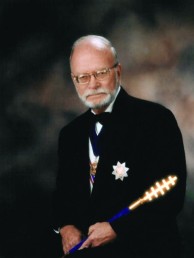 The leaders of world Freemasonry, once again had the oppor­tunity to visit the unique and fascinating environment of India under the auspices of Freemasonry. For most Freemasons, this would be a once in a lifetime opportu­nity.

The XIIth meeting of the World Conference of Regular Masonic Grand Lodges was held in Chennai, India on November 21-23. The themes for the conferences in the past have tended to take on and reflect a dominant interest of the countries in which they are held.

The theme for this conference, “The Role Of Freemasonry in Universal Peace­keeping“ followed in the same pathway. There were 11 papers presented relating to this theme.

It was the first time that the World Conference met in the same country that had hosted it previously. The VIth World Conference met in Delhi, India exactly 10 years ago in November, 2002. As in the previous conference, the Grand Lodge of India dis­played a unique form of hospitality that characterizes the residents of this great country. The venue for the conference was excellent. The recep­tions were designed to afford the greatest opportunity for those attending to meet and to relate to one another. The food offered was of such a great variety so as to satisfy every palate and the entertainment provided, including both orchestral music and dance, exemplified the culture of the country.

Papers based upon the theme of the conference were then presented or submitted by representatives to the conference from the Grand Lodges of India, Canada in the Province of Ontario, Venezuela, Río Grande do Sul, Brazil, Cartagena, Colombia, British Columbia and Yukon, Haiti, Madagascar, Italy, and Romania. 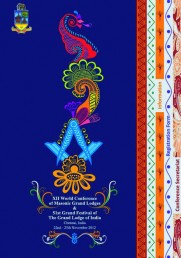 The business portion of the conference was held during the last session. Reports of the Executive Secre­tary were given and revisions to the Constitution were adopted.

The Grand Lodge of India, before the closing of the conference, distributed booklets in which each of the papers that were presented at the conference were printed. This was a remarkable display of efficiency by this jurisdiction not seen before in a World Conference.

MW Brother Radu Bălănescu, Grand Master of the NGLR then reiterated his invitation to attend the XIIIth World Conference to be held in Bucharest, Romania in May, 2014. The structure of this con­ference will be somewhat different from the pattern that has been used in the past. Publications will also be developed by the Grand Lodge of Romania, the first to be issued in 2013. These publications will be in support of the World Conference in general and to provide information regarding the XIIIth conference to be held in Romania in particular, to the Regular Grand Lodges of the world.